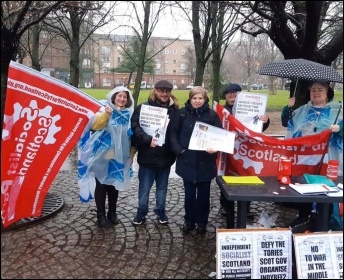 At least 80,000 marchers packed the rain-soaked streets of Glasgow in a mass Scottish independence demo on Saturday 11 January. The date was set hours after Johnson's victory in December.

This was not just a repeat of the sizeable 'All Under One Banner' marches of the last couple of years. The protest reflected mounting anger at the prospect of another Tory government, and a growing willingness to struggle for independence to end austerity and change society.

The marchers were, more than previously, drawn from working-class communities across Scotland - particularly Glasgow and the west. The young were the last to appear, but came in their thousands and with militancy. Many of them were too young to vote in the first 'IndyRef' in 2014.

They chanted "Tories, Tories, Tories - out, out, out", "Boris Johnson's got to go", and "when Tories say cut back - we say fight back!" Rather than being despondent after the election, the demo indicated a growing mood to fight.

Homemade banners were displayed with the slogan "our right to decide," confronting the arrogance of Tories - but also Blairites like Jess Phillips - who deny Scotland the right to a second independence referendum.

This was a march that showed the growing space to the left of the official leadership of the independence movement, the ruling Scottish National Party (SNP). The SNP naively believes Johnson will cave into accepting its mandate. The SNP won 80% of Scottish MPs on a pledge of delivering 'IndyRef2'.

But the ruling class in Britain will do all it can to oppose a second referendum, fearing the result will mean the break-up of the UK. Under those conditions, a Catalonia-type confrontation is developing that will see mass pressure on the SNP to defy the Tories' refusal to concede the right to self-determination.

What is clear, is that a mass movement for democratic rights is unfolding in Scotland.

Despite the biblical weather, Socialist Party Scotland stalls were busy, with a great response to our slogans. We heard many times: "An independent socialist Scotland? I agree with that, give us one," as we gave out thousands of leaflets.

The argument from nationalists that we should not raise socialism at this stage, but only focus on independence, was weaker this time.

Marchers crowded our stalls to sign petitions - calling for a mass working-class campaign to demand IndyRef2, and on the Scottish government to defy the Tories and organise a referendum. We linked these demands for democratic rights explicitly with the need to fight all cuts, for public ownership of the economy, and socialist change.

Workers and trade unions are in conflict not just with the Tories, but also the SNP and Labour - over cuts, low pay, attacks on the trade unions, and privatisation. An independent, working-class and trade union-based campaign will need to be built to fight for socialist independence.

Fighting for socialist policies will be crucial to winning a majority for independence as the SNP tacks further in a pro-business direction, narrowing the appeal of independence. And even now, after its catastrophic result, the left in Labour does not seem willing to confront the Blairites and change course.

What is needed is a new mass workers' party in Scotland, fighting for socialist policies to lead the struggle against cuts and capitalism, and for an independent socialist Scotland.

We stand for working-class unity across nations and continents, advocating a voluntary and democratic socialist confederation of Scotland with England, Wales and Ireland, as a step to a socialist Europe.

And like more than 300,000 pro-independence voters in Scotland who voted Leave in 2016, we oppose the bosses' EU. We fight instead for a socialist Europe to end racism, poverty and capitalist exploitation.