Over the last few months, retail has been vying with schools for the top spot for Covid-19 outbreaks

100% pay now!: The health crisis is now worse than at any time since the start of the pandemic. More people are in hospital and more are dying daily.

With the new lockdowns, what can students expect for the rest of the academic year? 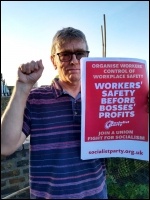 We can't believe a word this government says or does. Going into lockdown 3, working-class people can only rely on our own strength and organisation.

The Social Dilemma is a film recently produced by Netflix, exploring the impact of social media on society

Our financial appeal at Socialism 2020 raised a fantastic £50,145.80. Much of the money pledged has now been paid, we would like pledges to be redeemed by 20 December.

The Socialist Party hosted Socialism 2020, a series of online workshops and rallies, from 20-23 November

Socialism 2020 broke previous records - on ticket sales, in the response to the finance appeal, in the number of workshops and in the participation in the discussions on ideas to change the world

Socialism 2020, from Friday 20 to Monday 23 November, will be like no other event you will attend this year