The Labour leadership contest begs the question: what is the point of the Labour Party?

The Fire Brigades Union 2015 conference is being held just days after the general election. Another 20% of cuts by the Tory government would reduce the fire service to the bone 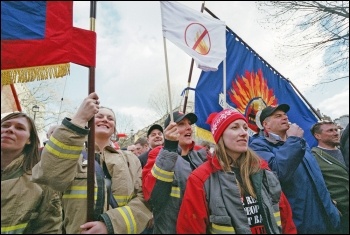 Firefighters across England struck on Wednesday 25 February, and together with others from across the UK demonstrated outside parliament

On 10 February, the FBU firefighters' union is holding a recall conference over its pension dispute with the government, which is insisting on increasing firefighters' retirement age from 55 to 60 from April 2015

Reports from the NSSN bulletin

News from FBU pickets during the four-day strike; and a victimisation report from Bucks

Firefighters today announced a significant escalation of strike action, with four days of strikes commencing on 31 October until 4 November

The disastrous consequences of just one element of cuts and privatisation in the fire service recently hit the news, when a fire crew from Carlisle in Cumbria were instructed to attend an incident near Bolton in Lancashire - a 200 mile round trip

FBU names eight dates: The firefighters' union, the FBU, has announced an eight-day period of industrial action in England and Wales in defence of pensions