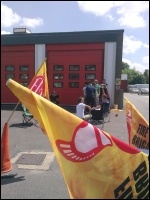 'As with the last strike it's been absolutely solid across the brigade', commented FBU Salford secretary Paul Davies

The FBU union plans a 24-hour strike across England and Wales to protect firefighters' pensions, following 12 shorter strikes since September 2013

Lambeth College: University and College Union (UCU) members at Lambeth college in south London were on strike on 1 May

Following national strikes in November and February, firefighters are once again demonstrating their refusal to accept the pension robbery on offer

HCA strike: Over 68% of Unite members at the Homes and Communities Agency voted for strike action over the divisive and unfair way that the Agency has chosen to allocate pay

A TUSC stall in Derby with the new banner

Cuts kill: The Fire Brigades Union (FBU) has accused Tory London Mayor Boris Johnson of 'having blood on his hands' following the death of a pensioner in Woolwich

Firefighters' strikes on Xmas eve and after

Firefighters in England and Wales will be on strike again over pensions on Christmas Eve, New Year's Eve and 3rd January

Firefighters determined to fight on 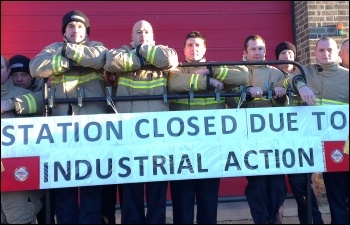 Over 30 joined the picket line in Gipton, Leeds, as firefighters walked out to be joined by fellow off-duty FBU members

Firefighters will assemble in London on 16 October to demonstrate against changes to pensions and cuts to the fire service, writes Neil Cafferky.