The danger of violent far-right hate groups has not disappeared along with Donald Trump. In Portland, Maine, members of the Proud Boys - a white supremacist hate group - have been meeting in Mathew's

"Get out of our town and take your racism with you," was one of the messages hurled by shoppers at the small contingent of English Defence League (EDL) members trying to stage a demonstration in Keighley, Yorkshire

With only a day's notice, around 100 people gathered outside the US embassy in London on 15 August to stand in solidarity with Charlottesville anti-fascist demonstrators

40 years ago almost to the day before Charlottesville, on 13 August 1977, the fascist National Front aimed to march through Lewisham 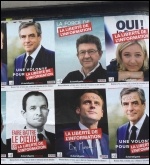 A handful of fascists from nearby Bishop Auckland had invited Nazi groups from across the UK to march in Darlington on 5 November. They were confronted by 200 local people.

Theatre - 'Dare Devil Rides to Jarama': The 1930s was a decade sharply divided between left and right. It was also a time when intrepid motorcycle racers stunned spectators with 'speedway' stunts. Socialist theatre company Townsend Productions combines the two in its upcoming show.

For a brief moment 80 years ago, in a hint of what Spain as a whole would become, Barcelona became the focus of opposition to fascism. In July 1936, 6,000 athletes arrived in the city, greeted by banners and bunting welcoming them. They were no ordinary athletes; the socialist hurdlers and the anarchist shot putters were there for the Olimpiada Popular, the People's Olympiad.

In response to a threat from fascist group South Coast Resistance to march under the slogan 'Refugees not Welcome Here', over a thousand counter demonstrators arrived at the assembly point by the Bargate in Southampton on 2 July, without a fascist in sight.