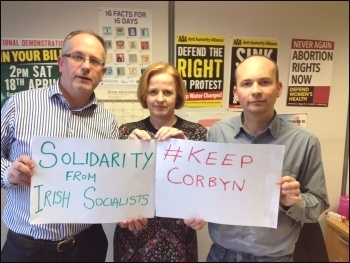 Anti-Austerity Alliance TDs in the Irish parliament, of the Socialist Party in Ireland, backed Corbyn's anti-austerity stand - now he must take the fight to the establishment internationally   (Click to enlarge)

The Trade Unionist and Socialist Coalition (TUSC) has added its support to an appeal to Jeremy Corbyn by socialist members of the Irish parliament (TDs). Both groups see Brexit negotiations as an opportunity for an international anti-austerity campaign.

The TDs, members of the Socialist Party's sister party in Ireland and the Anti-Austerity Alliance, had written to Jeremy Corbyn earlier this year.

TUSC chairperson and former Labour MP Dave Nellist, a member of the Socialist Party and backbench rebel colleague of Jeremy Corbyn in the 1980s, said: "It is fighting socialist policies that are needed to 'fill the gap' and undercut the far right, not efforts to conciliate with establishment politicians.

"Only young people, workers, and middle class people hit by austerity have an interest in ensuring that the Brexit negotiations don't give a new impetus to the pro-market, privatisation and anti-worker policies that have shaped the EU treaties.

"To reach them, Jeremy needs to more decisively break with the failed establishment politicians, here and in Europe."