The general election in Ireland saw a seismic change in the electoral landscape, with a big surge in support for Sinn Féin.

The campaign has gained the backing of Len McCluskey

Defend the right to protest: "We are more akin to a banana republic, and the rotten nature of the Irish state has been exposed." These were the words of TD (MP) and Socialist Party member Ruth Coppinger in the Irish Parliament on 15 February as she rose to question Taoiseach (prime minister) Enda Kenny.

The Irish government has refused to give a second reading to a bill for a repeal referendum on restrictions to women's abortion rights. There has been a clear development of a pro-choice sentiment within society. This shows the need to develop the struggle outside parliament.

Enda Kenny, Fine Gael's acting Taoiseach (prime minister), has been forced into a humiliating climbdown over the imposition of unfair water charges. The suspension of the hated levy is a victory for anti-water charge campaigners, particularly the Socialist Party (CWI Ireland) and its strategy of building a mass non-payment campaign.

"Real change, not spare change" Three members of the Socialist Party have been elected to the Irish Parliament as part of the Anti-Austerity Alliance. Ruth Coppinger, who was re-elected in Dublin West, spoke to the Socialist on 29 February. 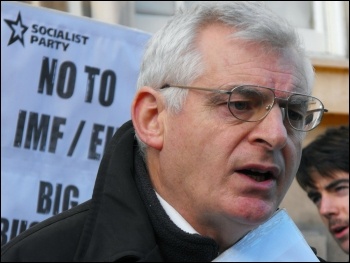 Socialist Party councillor Clare Daly was elected as a TD for the first time in Dublin North with 7,513 first preference votes or 15.2% of the vote, and Joe Higgins, a TD from 1997 to 2007 and currently the Irish Socialist Party's MEP, was returned to the Dáil (parliament) representing Dublin West, gaining 8,084 votes (19%).

Ireland: Socialist Party wins two parliament seats The general election in Ireland was historic but not for the reasons being stressed by the would-be new government partners of Fine Gael and Labour. 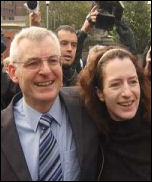 After the economic collapse of the so-called 'Celtic Tiger' economy, Ireland is spiralling into social and political disintegration. The Socialist Party (CWI Ireland) will stand candidates in the coming elections as a key part of the United Left Alliance (ULA).

Irish election: An above average Joe

SOUTHERN IRELAND'S general election for the Dail, Ireland's Parliament, on 24 May gives working-class people a chance to say what they think of the 'Celtic Tiger' economic boom that has made huge profits for big business ...

HUNDREDS OF people languishing on trolleys in A&E departments, tens of thousands on hospital waiting lists, Û415,000 for an average house in Dublin, commuters wasting hundreds of hours a year stuck in traffic jams, the second...