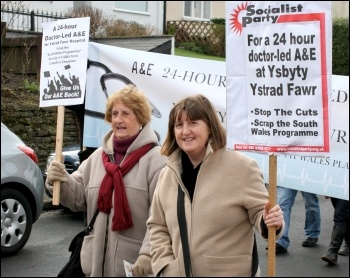 Caerphilly march to save the A&E, photo Becky Davis 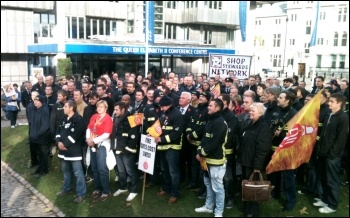 The Fire Brigades Union (FBU) met on 15-17 May in the teeth of enormous attacks on firefighters and on the life-saving service they provide, writes Claire Laker-Mansfield.

Clapham march to save fire station

Hundreds marched to resist the closure of Clapham fire station, one of 12 to fall victim to the mayor's slash and burn budget

London: Save our fire service!

On 16 March, firefighters and supporters will be out in force protesting against London mayor Boris Johnson's plans to cut £50 million from London's fire service, writes Chris Newby.

Capenhurst victory: Construction workers on the Capenhurst construction site near Chester have fought off attempts to abandon the NAECI national agreement on terms and conditions...

The public consultation exercise has begun on proposals by the commissioner of the London Fire Brigade, Ron Dobson, supported by the mayor of London, Boris Johnson, to close 12 fire stations, remove 18 engines and slash 520 frontline firefighter posts... 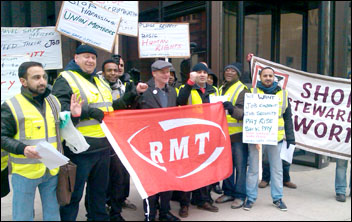 RMT security and safety staff strike against bullying and harassment and an attempt to impose workplace changes without agreement 25th February 2013 , photo by P Mitchell 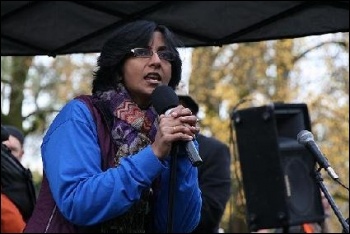 In November 2012 Kshama Sawant, a member of Socialist Alternative, the Socialist Party's counterpart in the USA, stood in Seattle in the election for a seat in the Washington state house.

"An accident waiting to happen," was how one of my tower block neighbours summed up the Vauxhall helicopter crash, writes Steve Nally, Brixton Hilll Trade Unionist and Socialist Coalition candidate.

'You won't see an investment banker with a hose'

Victory: After 1,000 firefighters protested outside a meeting of the London Fire Authority, the Authority voted 9:8 against closing fire stations and cutting jobs. But the mayor vowed to continue 'consulting' over the cuts 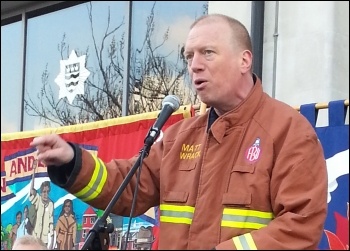 The Fire Brigades Union has condemned proposals by the mayor of London to close 12 fire stations, remove 18 fire engines and slash firefighters' jobs

No to NHS attacks: NHS workers are being threatened with the break-up of the national pay and conditions agreement, Agenda for Change...

On Friday 21st December West Yorkshire Fire and Rescue Authority met to pass £7 million worth of annual cuts to its budget including the closure of six fire stations and the loss of over 200 firefighter posts...

On the tenth anniversary of the national Fire Brigades Union (FBU) dispute, a benefit event will be held on Friday 16 November