Hundreds of people attended the vigil for Grenfell, in west London to mark four weeks on from the terrible fire

Survivors of the fire are still homeless, and blocks around the country are unsafe

Every day seems to bring a new insult to the survivors of the Grenfell Tower fire. They are still seeking assurances of local rehousing. Their landlord has charged them rent for burnt-out homes in error.

More than 28 years after the Hillsborough disaster, charges are being brought against the policeman in charge and five others

Stop testing cladding and take it down - this is the message from David Orr, the Chief Executive of the umbrella body for housing associations, the National Housing Federation

"From day one following the fire, our members were on the ground arranging accommodation for those victims, unloading lorries and distributing items"

Do you have something to say? Letters to the Socialist's editors. Former Kensington estate resident comments on Grenfell; cuts cause more fire deaths in Portugal; Corbyn hope leads to youthquake; The Handmaid's Tale.

The Queen's Speech; and defending the right to protest

A comment on the horrific 'Tory carnage' in West London

"Tory cuts, austerity and deregulation will have played a key part." 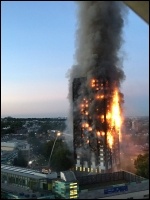 Letters to the Socialist's editors including the general election, Militant in Liverpool, the Holocaust and football.