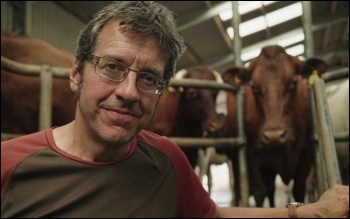 Environmental journalist and campaigner George Monbiot recently narrated a thought-provoking documentary on Channel 4 - Apocalypse Cow - in which he argues that the current agribusiness model is unsustainable and that there has to be a complete revolution in farming practices.

Monbiot points out that in the UK, for example, most land is used to produce meat products which destroy carbon-absorbing trees and pollute the land and rivers. Moreover, the use of imported animal foodstuffs from palm oil and soya plantations is encouraging the continual destruction of rainforests, thereby adding to global warming.

He argues that if the current rate of soil erosion and degradation is maintained then a collapse of food production is likely in 60 years' time.

So what's the solution to this doomsday scenario? While being a committed vegan, Monbiot doesn't overly rant against meat eaters. He suggests switching the £26,000 average annual government subsidy from UK livestock producers to farmers who would instead rewild their farms - returning the countryside to a more natural state, and thereby restoring the eco-system.

But hang on, what are people supposed to eat?

Firstly, he visits a farmer in Glamorgan growing organic vegetables who doesn't import fertilisers but instead uses a combination of weeds and wood chippings to enrich the soil. The uncultivated patches also attract aphid eating insects, thereby acting as a natural pest-control system. Monbiot claims that crop yields are on a par with conventional farms.

Next, he visits a Welsh livestock farmer who, having witnessed the destructive impact of agribusiness on the Amazon rainforest, is developing laboratory cultured meat. If scaled up to industrial levels, this would very rapidly remove the need for cows. (Presumably dairy products such as milk, butter, cheese, etc, would be synthesised from plant material).

However, the meat cell cultures would still require the input of plant material. But even here there's a solution.

Monbiot jets off to Helsinki (having apologised for taking a flight) and visits a start-up where scientists have created foodstuffs (similar to whey protein) from bacteria and water - literally out of air! The electricity needed for this process can be generated by renewable non-fossil fuels.

Monbiot's arguments (despite his sanctimonious tone) are compelling, but there's a rub. With a few exceptions, agribusiness will continue along its self-destructive path as long as the capitalist system reaps handsome profits and as long as governments continue to support this system.

In other words, system change requires socialist change - not that Monbiot advances this. Instead, he gives the example of an 'enlightened landowning billionaire' in Scotland who is removing deer and rewilding the land, and a small rewilded area of farmland in the Netherlands which the government purchased for use as a floodplain. Clearly, this isn't going to affect the trajectory of food production globally. For that to happen we need international socialism.