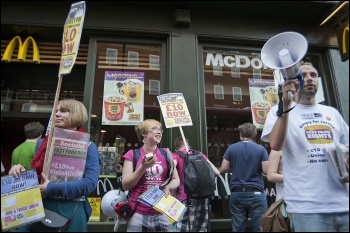 McDonald's workers employed at company-owned restaurants will be receiving their biggest increase in pay in ten years on 22 January.

Workers organised in the Bakers, Food and Allied Workers Union (BFAWU) took historic strike action at stores in Crayford and Cambridge on 4 September last year over pay, conditions and bullying. As a result they have now won a significant pay rise for themselves and all McDonald's workers in the UK.

BFAWU general secretary Ronnie Draper hailed the increase in pay and said: "When people say that strikes achieve nothing, they should look at the changes taking place within McDonalds. These brave workers have taken on the second largest employer in the world, and are winning."

Indeed. Exploitative youth rates paid to those between the ages of 16-25 are set to continue - they will still not be paid the £10 an hour that their over-25 workmates will receive. As well as this, franchise-owned branches, which make up 65% of those in the UK, will still continue to set their own rates of pay.

At my restaurant the franchise owner says workers will be paid in line with the company's announcement, but whether this will happen remains to be seen, especially given that in the past workers have sometimes been underpaid for work that they have done.

For this reason BFAWU will continue organising in restaurants up and down the country, including in my own, to ensure that all McDonald's workers win £10 an hour, trade union representation and fair treatment.