A man was stabbed in the back as he walked along Barton Street, the street I live on in Gloucester, recently

Women have borne the brunt of the cuts inflicted by the Con-Dems and the current government. Of the people living in poverty in this country, 40% are women and 23% are children.

Sue Powell, TUSC parliamentary candidate for Gloucester, spoke at a Gloucester College hustings on 19 March in front of 50 students 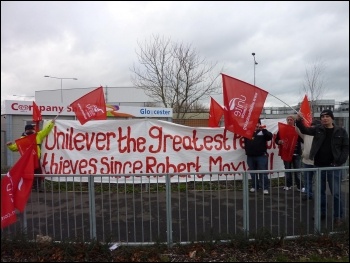 'HOW WOULD you like your cuts?,' the 'consultations' by Gloucestershire County Council's (GCC) Road Show asked, mainly when working people could not attend, writes Gloucestershire Socialist Party. 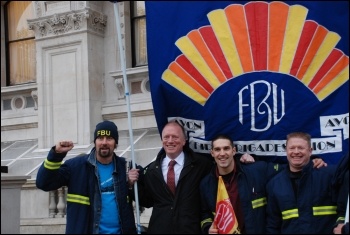 Matt Wrack with firefighters at their rally and lobby MPs against cuts, photo Suzanne Beishon

On 17 November FBU members from Gloucestershire joined the 2,000 firefighters who poured out of their rally at Westminster and blocked the road outside Parliament, writes Chris Moore, Gloucestershire Socialist Party.

'How would you like your cuts?' was the theme of Road Show consultations held by Gloucestershire County Council (GCC), mainly when working people could not attend...

University of Gloucestershire staff fight back

The University of Gloucestershire (UoG) is £36 million in debt and plans £3 million of cuts by July 2010, writes Chris Moore.

Cars hooted their support as postal workers' picket lines were solid across Gloucestershire this week, even more so than during the 2007 strike, writes Chris Moore, Gloucestershire Socialist Party.

Comment: Twenty year old Ashley Jenkins has recently joined the Socialist Party. Here he explains his experiences as a tenant in Gloucester...

Sack the bankers not the workers

The proposed takeover of HBOS by Lloyds TSB will result in anything from 20,000 to 40,000 jobs being cut, writes a Cheltenham and Gloucester bank worker.

TWO YEARS after they were first flooded, Gloucester residents Martin Ison and Tina Spiers are still cramped into the upstairs of their house while below reeks of damp and looks like a building site, writes Chris Moore, Gloucestershire.

The Socialist would welcome reports from readers of any other anti-cuts election successes, writes Chris Moore and Derek McMillan.

"Why I am standing against Labour"

PHIL JORDAN, South West Regional chair of the FBU (Fire Brigades Union) and Gloucester trades council president, is standing in Tuffley for the Gloucester city elections on 1 May as an independent...

ON 19 April a Save Our Post Offices (SOPO) rally in Gloucester's shopping centre attracted 50 local campaigners...

SAVE OUR Post Offices (SOPO) campaigners have scored a first-stage victory by forcing Gloucestershire county council (GCC) to consider an 'Essex type' rescue plan for the 27 post offices facing closure in the county, writes Chris Moore, Save Our Post Offices campaign.