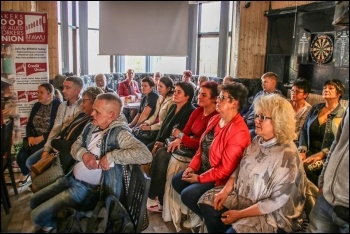 Leicester Socialist Party and the National Shop Stewards Network (NSSN) attended an emergency branch meeting for workers from Tulip, a food processing plant in Coalville. The members present on 24 September voted unanimously to ballot for industrial action due to a series of abuses by their employers. This was after talks between Tulip and the bakers' union (BFAWU) broke down.

Workers at Tulip have not received a pay rise in three years. This is despite the extreme conditions in which they work, handling meat at -4°C and -5°C all day.

After pay talks broke down, and without regard to the health and safety of their workers, Tulip stopped providing gloves. When workers asked for plasters for cuts on their hands damaged at work, they were refused.

A consolidation of pay grades and the removal of premium rates have meant a real-terms pay cut for these workers. These are workers who are already losing wages having to pay travel expenses to get to the remote site.

Tulip is owned by Danish Crown, a global company that recently invested £140 million in infrastructure. It has the financial security to invest in its workers but has so far refused to. Of the 19 demands BFAWU put forward to Tulip, all were rejected.

At the meeting BFAWU pledged to support and fight for its members. Leicester Socialist Party, along with the NSSN, is proud to support the workers too, offering ongoing support to the Tulip staff and BFAWU.

In a brilliant closing speech, Alex Morgan, a member of PCS and the Socialist Party, (translated by a young Polish Socialist Party member Artur Wilk) said: "If PCS can beat the government, you can beat your employer. Solidarity!"