Birmingham bin workers, members of Unite the Union, feel angry that the Labour council has forced them into a fifth week of industrial action to defend jobs, pay and the safety-critical member of the bin wagon crew.

But as their action bites they feel determined to stick it out until victory. They want to get back to collecting Birmingham's rubbish but not on the council's shoddy terms. Workers are furious with council financial mismanagement of the service.

Solidarity action must be stepped up. The Socialist Party believes that all local government unions should hold workplace meetings to explain the dispute and the wider consequences should the bin workers be defeated. This can be followed up with bucket collections on the next payday.

In Small Heath, a community group have started their own rubbish collections. It's unlikely a small group of volunteers could make a difference to the level of uncollected rubbish but it is significant that the council has taken no action. They may think it undermines the strike, but workers are concerned that these volunteers have not been trained to collect rubbish or meet health and safety standards.

Some workers wonder whether the council is digging in for a long dispute, but the truth is that they have been put through this five week disgrace by council officers and senior councillors. Most councillors will be unaware of most of the issues, and it is time they were lobbied and had things explained to them. 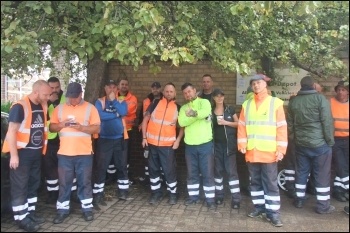 It has been rumoured that some Birmingham Labour MPs have been pressuring the workers to compromise rather than demanding the council withdraw the job losses and downgrading.

A local Communication Workers Union branch passed a motion of support moved by a Socialist Party member and also agreed to write to Jeremy Corbyn asking him to remind Labour councillors that they should not attack their own workers.

Many feel that these Labour councillors should not be allowed to stand as Labour candidates at next year's election. Labour Party members should challenge councillors who are not supporting the bin workers.

Unite has made it clear that they will back the workers financially and industrially for as long as it takes and a hardship fund is in the process of being established.

Socialist Party members have been visiting the picket lines at all four depots regularly and are warmly welcomed by the strikers. Four bin worker bulletins have already been produced and been well received with many workers reading them on the picket line immediately.

On the 'Support the Brum Bin Strike' Facebook page one worker is quoted: "We've been bending over backwards for these lot for eight years now, but you can only kick a dog for so long before it turns round and bites you. This is what's happening right now".

It is vital that solidarity is built as this dispute could drag on. All readers of the Socialist should pass motions of support and send donations from union branches and other organisations.