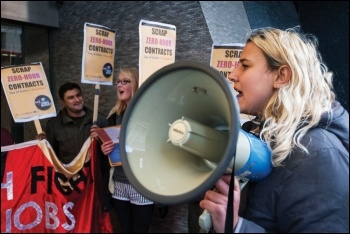 Fight for secure jobs for all

910,000 workers in Britain are on zero-hour contracts - a six-fold increase since 2008 - according to analysis by the Resolution Foundation think-tank. The Trade Union Congress expects it to top a million shortly.

The rise of zero-hour contracts in place of more secure ones leaves workers facing insecure futures where homelessness is a week-to-week threat.

I have first-hand experience of trying to survive, and raise a daughter, on zero-hour contracts. I can attest to the stress and hopelessness that can accompany this situation.

Living on a zero-hour contract often means having very little idea of weekly income, making planning for the future impossible. In order to sustain themselves, workers are sometimes having to take on more than one zero-hour contract at a time, leading to a chaotic and stressful lifestyle.

At one point I had two zero-hour contracts and one 12-hour one. But due to the instability of the hours I was given, I was still having to sign on to survive in the weeks where I was earning less than I would be on the dole.

This caused intense stress not only for me, but also for the job centre staff who had to deal with my claim, highlighting that the current benefit system is insufficient to deal with the prevalence of zero-hour contracts.

Never knowing where the next electric payment or food shop is coming from, let alone what the future holds in terms of employment, means workers are trapped in a hand-to-mouth cycle. This has inevitable consequences for their mental wellbeing, and subsequently wider social implications.

In order to tackle this, the Socialist Party fights to scrap zero-hour contracts, and guarantee full-time hours and permanent jobs for all who want them. We campaign for trade unions to take the lead on achieving this, through membership drives, protests and strikes.