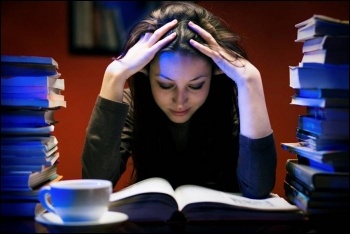 Since the regular GCSE grading system of A*-G was replaced with the 9-1 grades, levels of stress, anxiety and mental disorders have increased among young people in schools.

What is the issue of replacing the letters with numbers? The GCSE 'specs' - the exam rules, the amount we have to 'learn' and level of homework - that come with it.

Coursework has entirely been removed from GCSEs. And with the exception of one or two speaking and listening tests it's mostly written examinations now.

Even drama, a subject about getting on your feet and expressing your creative freedom, is now 40% written examination with exam board Edexcel.

This is so with all the subjects, written examination has taken over. For example, for triple science - physics, biology, chemistry - you have to take nine exams where three are for each of the sciences. They teach the different modules in the order of the exams and it seems more and more like it's meant to test our memory functions rather than intelligence.

What are we to the examiners, goldfish?

Under the old GCSE spec teachers used to be able to allow students to sit the exams at different points (for example, if you had three exams for one subject you could do one in Year 10). So I've calculated I have 20 or more exams to do in one academic year...

Even if you'd count yourself as 'strict' you can see how this is going to impact us. As the exam boards only have one set of results to compare us to, one horrible thing that has happened is that on the OCR board maths exams only 27% earned a 'standard' passing grade (grade 4) or higher. The best percentage - AQA exam board - was only 32%.

In English literature you're expected to have a memory good enough to remember quotes from 15 poems, novels, contextual information for all those poems, and not go blank under that pressure...

Across all the exam boards last year only 33% to 50% achieved a grade 4 or above in English language. This is a recurring theme now.

It has gone so far a student created a petition to parliament that has over 160,000 signatures. This is 60,000 above the required number for parliament to discuss having a debate and they will now announce the date soon.

The recurring theme of pass rates going down, the 'worst' schools being shown in league tables, rising mental health issues, austerity cuts to schools and academisation all show that we are indeed in crisis.

However, we can escape. Freedom from pressure, elimination of memory tests and a wholesome education not revolving around examination is not only what we want, but what we need.