Around 300 people from the city's Indian Sikh community turned out in Cardiff Bay on Saturday 12 December to protest in solidarity with farmers in Punjab, India, taking action against the brutal right-wing regime

Do you have something to say? Letters to the Socialist's editors. Worse-off women; farm fiends; Trotsky and Poland.

Debate over the genetic modification of crops raises questions for socialists and environmentalists as to the role of GM, as well as the wider issue of science under capitalism 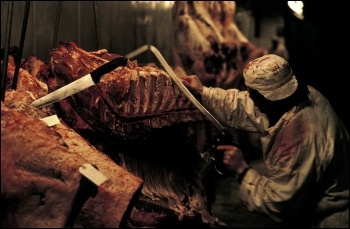 In the wake of the horsemeat scandal it's clear that food manufacturers, supermarkets and government ministers cannot be trusted to provide and ensure healthy food

THE FINANCIAL speculators and hedge funds that so spectacularly contributed to the financial crisis resulting in the 'Great Recession' have now turned their attention to the international food market with devastating consequences, writes John Sharpe.

THE FOOT and mouth disease (FMD) outbreak that started on 2 February has caused a major political crisis...

The deadly power of agri-business

THE GOVERNMENT'S 'Operation Cobra' policy to eradicate foot and mouth disease (FMD) is a failure. Parts of the countryside are knee-deep in slaughtered animal carcasses yet the disease shows no sign...

Foot and mouth disease: another crisis for agribusiness

THE RECENT outbreak of the highly infectious viral "foot and mouth disease" has discredited British farming and agribusiness once again, writes Amrita Huggins.