The RMT union has written to the alleged safety regulator, the Office of Road and Rail (ORR), cataloguing a list of serious breaches of statutory duty that occurred during industrial action on South Western Railway.

Among the list of occurrences reported were: 'contingency guards' giving the ready-to-start command on stop signals; opening carriage doors early; reporting incidents belatedly; failing to log those instances; and even, in one instance, dispatching a train on a red light.

Alarmingly, the ORR is once again failing to respond adequately to this series of blunders pre-emptive of a much larger accident waiting to happen.

After all, it was only in 2015 that a passenger was dragged along a platform and injured after their luggage was trapped in door of a driver-only-operated train.

Instead, the ORR continues to stand firm, refusing to acknowledge that contingency guards - scab labour - are no substitute whatsoever for fully trained and qualified professionals with passenger safety, not profit, at the heart of their duty.

To hear a union leader say that he was not "consulting his lawyers" before carrying out the wishes of his members was a welcome change from those union leaders whose first recourse has been to legal action. It is many years since the legal profession led a mass movement in favour of the working class!

The hate campaign of the mass media focussed on Len McCluskey's words at the National Shop Stewards Network rally ahead of TUC congress in Brighton.

Yet he was not calling on Unite members to engage in murder or arson, but to oppose an unjust anti-union law.

When a Conservative government imprisoned five dockers in 1972, that created a mass (illegal) movement which came close to a general strike - before the government produced the "official solicitor" like a rabbit out of a hat to declare that the 'Pentonville Five' had "purged their contempt" and should, therefore, be released.

The trade union movement was not fooled. This was a massive defeat for the Tories.

I doubt if that is the kind of outcome John Humphrys of the Today programme had in mind when he launched his attack on Len McCluskey.

Humphrys has a record of standing up to Tory ministers so it was a falling-off of standards to see him baying with the Tory pack for Len McCluskey's blood.

The phrase "better to break the law than break the poor" exemplifies workers' representatives standing up against unjust laws.

It originated in Poplar in 1921 when, indeed, socialists were imprisoned for standing up for the working class.

It was an inspiration for the Labour council in Liverpool in the 1980s which took on Thatcher and showed she could be beaten.

What a contrast from today's Labour councils, such as in Birmingham, who have been the cheerleaders of austerity.

Nobody wants to break the law, nobody wants to go to prison. Yet, like Tommy Sheridan, Terry Fields and others in the fight against the poll tax, it is a price people with principles are prepared to pay. 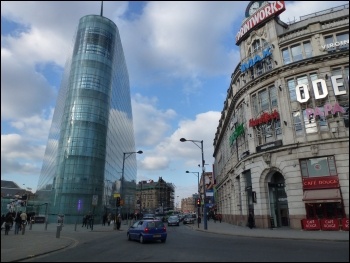 I live in Chorlton, Manchester, where I have rented for seven years, and it is now being slowly gentrified.

Pubs and places to shop and eat are becoming much more expensive to pander to the new, wealthy homeowners.

Local businesses have also become victims of gentrification through the cost of renting more expensive premises, and the loss of loyal customers forced to move.

There are four sites in Chorlton on the redevelopment hit list. Chorlton baths, is currently owned by Manchester City Council which is in talks with a 'social housing provider' - no name given - to build 40 homes.

The remainder of the site will be used by the vegan grocer Unicorn for retail expansion.

Locals have registered concerns such as added pressure on schooling, doctors' surgeries and road congestion, which is already a problem.

Rye Bank Road is owned by Manchester Metropolitan University, which has been involved in a 50-year-old dispute with residents.

Locals want the land to be given official village green status. The university has made four unsuccessful attempts at permission to develop.

The site was donated by Manchester City Council to the university on the basis it be used for recreation only. A total of 70 executive homes have been earmarked for the site.

Turn Moss playing fields is a site already used for recreation, but has now come on the radar of a property company.

It has joined up with the 'Class of 92', ex-Manchester United players, to launch a new university. As of yet the details of the plans are pretty vague.

As a local resident, seeing so many proposals for developments brings home the real threat of big business profiteers and their pernicious programme of social cleansing. They have no moral qualms whatsoever about the communities they destroy.

Councils should not allow more luxury homes to be built. We need social housing and rents that are capped at affordable rates.

I'd support Corbyn's proposal of local areas needing a referendum on proposals for redevelopments to ensure it is done in the interest of working class people, not the super-rich!

Three or four years ago I visited my town council planning committee and proposed that permission to build new homes, in fact all new buildings where possible, should not be passed without the stipulation that they are fitted with photovoltaic panels or tiles or ground-source heat pumps, perhaps both where possible.

My proposals went down like a lead balloon. Well, not exactly - one local councillor listened and wrote to a local newspaper the following week with the same suggestion as though it was his own. Still, nobody else was interested in even thinking about it.

I can tell you that I am, and as I am 94 years old I am unlikely to suffer the worst effects of global warming myself, but still consider those that come after me.

If they were designed-in, that would mean far less cost - especially if every new house had them, because of economy of scale. Houses now cost far in excess of the extra amount involved.

I note that some new developments of local houses for which plans have recently been passed intend installing electric car charging points.

No problem there then. Wouldn't it be good if they also had heating from renewable sources?

Is it, perhaps, that the present money-grabbing fuel suppliers would lose out? Well, my heart bleeds for them.

I'm more interested in the ordinary man, woman and child who have to pay through the nose in order to keep themselves warm - not to speak of bathing, laundry, cooking, fuelling their vehicle etc - and at the same time need clean air to breathe.

Why not government-funded and owned laboratories being opened with the task of inventing electrical storage? There are plenty of well-trained people looking for a good job, not to speak of all those untrained people who would be glad of training.

I found 'Blacklisted' a revealing book. In construction, agencies are in control, with umbrella companies running a racket. Agencies control the job market and leave you with no choice.

They say you can work for £9.50 under the umbrella, or on PAYE for the minimum wage. Umbrellas take around £20 a week, and you pay both employer's and employee's National Insurance.

These umbrella companies are a scam and should be abolished now.