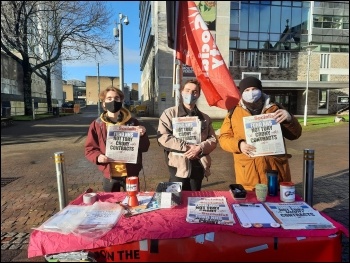 We have now surpassed 400 signatures for our rent strike, with over £710,000 pledged to be withheld. For students there is no equivalent to the furlough scheme, and we're expected to hand over the majority of our maintenance loan to pay for accommodation that a lot of us aren't able to access.

As part of our campaigning, a banner drop planned for 13 January had to be scrapped after multiple phone calls from the police.

Five key organisers of the rent strike received phone calls threatening us with a £10,000 fine if we demonstrated or put banners up on public buildings. I received one of those phone calls, and I'm not even in the Plymouth area at the moment. I'm locked down at my family home, precisely one of the reasons I'm striking in the first place!

Having the police intervene in such a heavy-handed way prompted us to hold an emergency meeting to discuss our strategy. We agreed to stick rigidly within the law, and to go ahead with the banner drops from our own accommodation.

Despite this, another one of our organisers was again threatened with a £10,000 fine, all because of a since-forgotten-about Facebook event set up before lockdown. He was told, even after removing the event from Facebook, that if any group is caught protesting on campus, he will personally be charged with incitement to breach Covid legislation.

Subsequently, we had to issue another statement, reiterating that we do not plan to hold any demonstrations and will discourage students from doing so until it is deemed safe. The police even demanded we send them screenshots of our doing this!

We have remained within the bounds of the law, and to still be harassed and intimidated has only succeeded in drawing more attention to the rent strike: it has really angered students. It raises huge concerns about the freedom to protest. We agreed that in our statement responding to the police phone calls, we would make it clear that as soon as it is safe to do so we will be organising a socially distanced demonstration on campus to give expression to the strength of feeling about our lack of support throughout lockdown.

Plymouth Rent Strike is linking up with student rent strikes across the country. Together we hope to draw up a list of demands, including an end to marketisation and a reduction in tuition fees.