Lesbian, gay and bisexual people in Britain are reporting lower personal wellbeing than straight people in all areas measured by the Office for National Statistics

A new film Pride, released 12 September, dramatises the founding of Lesbians and Gays Support the Miners (LGSM) and shows the London group's work during the 1984-85 miners' strike

In a sign of the changing mood and outlook of many LGBT workers and young people, this year's Mardi Gras in Cardiff on Saturday featured a protest march for the first time (in addition to the festival itself, held in Bute Park), writes Sarah Mayo 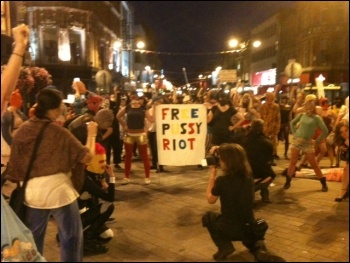 Dressed in brightly coloured balaclavas and costumes inspired by the punk group Pussy Riot, over 200 people gathered in Leeds city centre to protest against the treatment of the group in Russia

The Con-Dems' all-out assault on public services hits everyone - but some groups in society suffer disproportionately...

Endgame by Rise Against

Review: In 2010, Rise Against's lead singer Tim McIlrath said the band's motivation to tour almost continuously for the past eleven years was to influence the social conscience, writes Hannah Bastow.

Fighting homophobia: Take The Argument Into The Communities 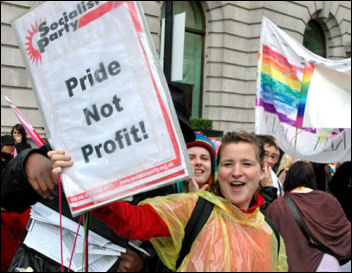 Leeds Socialist Party members formed a very visible and vocal contingent on the Leeds LGBT Pride march around Leeds city centre on 1 August, handing out leaflets calling for a united fight against homophobia and transphobia as part of the wider struggle for socialism...

The far-right, racist and homophobic British National Party won two MEPs in the European parliament. That's a warning to all of us on the lesbian, gay, bisexual and transgender scenes...

Twenty years since Section 28: This year is the twentieth anniversary of the infamous Section 28, an openly anti-gay law pushed through by Thatcher's Tory government, writes Greg Randall, Convenor of the LGBT socialist group.