The nation has been told to stay home. But that doesn't mean the same thing for everyone, writes Holly Eaton, West London Socialist Party.

Anti-Brexit hedge fund manager lauded while quarter of EU population at risk of poverty. Meditating MP charges us for his baths while voting to fine council tenants for spare rooms.

I joined the Labour Party as a school leaver in 1981 but by the mid-80s I left, completely disillusioned, and became politically inactive. Then, during the 2016 Labour leadership election, I felt enthused by Jeremy Corbyn's anti-austerity policies and the possibility that at last the Labour Party had a chance of defeating the Tories and their vicious cuts.

The housing crisis continues to deepen under this rotten Tory government. Many renters are now shelling out over half their net income to private landlords. But despite the acute shortage of affordable housing, Teresa May's ministers are pursuing a vicious campaign against social housing tenants. This is on top of the Tories' vindictive 'bedroom tax'.

It's one world for the super-rich, and another one for the rest of us including facts and figures about new PM Theresa May and the M&S pay cut.

We need socialist policies to end the housing crisis

Workers in the UK are suffering a severe housing crisis that is only set to get worse. A landlord-friendly Tory government is turning this crisis into a disaster for millions of households. 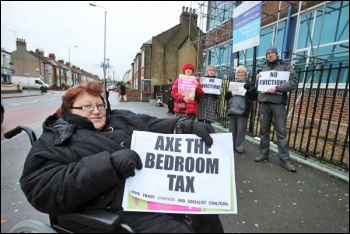 Protesting about a bedroom tax case

Bedroom Tax ruling: The fight to scrap it must continue

Socialist Party members were shocked to learn of the death of RMT member and TUSC candidate Dean Meehan at the age of 53.

The housing crisis - a crisis of the profit system

The ever-dwindling numbers of affordable homes to buy or rent is behind the deepening housing crisis in the UK.