Every time I drive up Lea Bridge Road in Walthamstow, east London, I pass the Butterfields estate. I look with pride to the 'Butterfields won't budge' poster still displayed in the window of one of the tenants.

'Keyworker' tenants of the housing association One Housing in Newham, east London, have been hit by a 40% price hike.

The Tories' 2016 Autumn Statement announced plans to ban letting agent fees - a move which young people and workers everywhere will surely welcome. But no date has been set.

We had worked on an absolutely fantastic and ferocious campaign. Now we have won far more than we could have imagined. 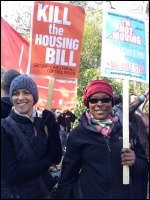 Victory for 'We will not move' Butterfields tenants

Tenants on the Butterfields estate have secured a victory

ITV London announced that estate agents are turning down business! - The result of pressure from tenants campaigning against eviction

Butterfields tenants have been fighting eviction since January 2016. They have put up spirited resistance. But now the new landlords are bringing possession summonses. The courts are stacked against tenants