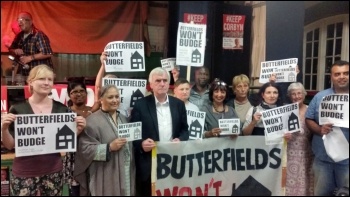 Those familiar with the usual brutal pursuit of profit in the London housing market could have been forgiven for thinking they'd fallen asleep and were dreaming in front of ITV London News on 23 September. The journalist announced that estate agents in Walthamstow are turning down business! But it's true - and all the result of pressure from tenants campaigning against eviction.

Residents on the Butterfields estate are continuing their heroic struggle to stay in their homes. In January, after their charity landlord sold 63 properties to an aggressive property developer, residents were told to be out by Easter. But most are still there.

With the help of Waltham Forest Socialist Party members, the tenants' campaign 'Butterfields Won't Budge', has successfully delayed the sale of many of the flats. First we disrupted auction sales - so the company gave up on that and turned to estate agents.

But following protests, phone calls, open letters and a social media campaign, pretty much all the local agents have agreed to boycott the company. At least two companies further afield who had started to advertise properties have pulled out after the campaign got in touch.

ITV quoted Foxtons: "Having learnt of the residents' concern, we have decided to withdraw our services on this occasion." And Kings Group: "Our sympathies lie with the Butterfields Won't Budge campaign and our thoughts are with all residents on the estate at this time."

You can show support by donating, especially trade unions and campaign groups, at www.justgiving.com/crowdfunding/e17butterfields and liking their Facebook page 'Butterfields Won't Budge'.