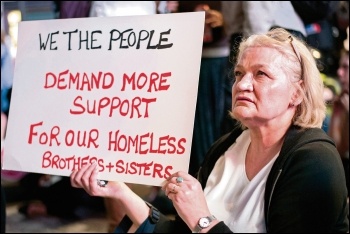 Tory and Blairite austerity has driven up homelessness, photo by Paul Mattsson   (Click to enlarge)

An enthusiastic crowd attended the launch meeting of the new Labour Homelessness Campaign. Left opinion columnist Owen Jones expressed anger that people sleep on the streets in Britain, one of the richest countries.

Rough sleeping has gone up at least 165% since 2010 and figures issued on the week of the meeting show rough sleeping in London up 31% in the first quarter of this year compared to last year.

It is no surprise that numbers dying on the streets are rising - up 24% over the last four years according to official figures.

There were at least six speakers on the platform, unfortunately none of them from a trade union. General union Unite - one of Labour's biggest trade union backers, and which organises homelessness workers - was not invited to send a platform speaker.

Trade union involvement in this campaign is vital, not least to avoid a situation where workers are seen as the enemy.

Speaking from the floor of the meeting, a homelessness worker in the Unite housing workers' union branch, Jack Jeffrey, called for Labour councils to take a stand against cuts.

He argued for them to set legal no-cuts budgets balanced by drawing on reserves and borrowing powers to save jobs and services.

Labour MP Kate Osamor said that although she was sympathetic things were 'more complicated'. She raised the question of Labour councils with no reserves, apparently unaware that there are none without reserves to borrow to avoid cuts.

She also warned of the danger of not setting a budget - a strategy no one had proposed!

A speaker from the floor got a big echo from the audience calling for Labour councils to collectively refuse to make cuts and to launch a campaign including strikes and civil disobedience against cuts.

The new campaign could play an important role in highlighting the issue of homelessness but there will be a need to discuss what programme can really tackle the crisis.