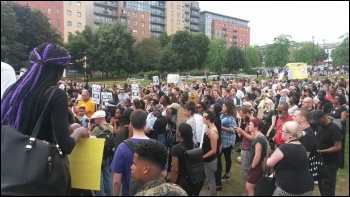 On 22 July Sheffield's first Black Lives Matter demonstration, a large and vibrant march around the city centre took place, beginning and culminating in big rallies of about 1,000 people.

This demonstration follows a wave of Black Lives Matter protests across the country organised largely by young, black, working class people. These are in solidarity with the massive movement in the USA that has built up as a response to the racist murders of black people by the police.

In the US in 2015, at least 102 black people were murdered by the police. That is five times the rate of the killings of white people, also horrendous crimes in themselves. In Britain, there is a growing consciousness among young black activists, radicalised by the movement in the US, that the UK is not guiltless.

For example the high profile racist murder of Stephen Lawrence in 1993, the investigation of which was marred by institutional racism and corruption, and most recently, the death of 18-year old Mzee Mohammed in police custody in Liverpool which is currently being investigated. 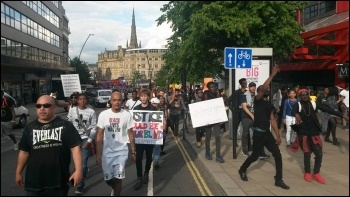 BLM demo, Sheffield, photo by A Tice   (Click to enlarge)

This demonstration highlighted the importance of viewing these racist attacks as part of a broader picture of the institutionalised racism, most immediately, of the police.

The point was made by several speakers however that this racism is embedded in more than just the police. It is embedded in the racist immigration services that make it much harder to migrate here as a person of colour than a white person. A system which detains hundreds of refugees and asylum seekers in detention centres like Yarls Wood, the vast majority of which are people of colour.

The organisers were clear that this is not the end, that there needs to be an extended campaign against racism, cuts, and austerity, and that this should become a movement as large and strong as we are seeing in the US.