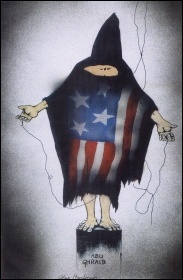 The long awaited publication of the US Senate report on the Central Intelligence Agency's (CIA) interrogation methods of suspected terrorists amounts to a grisly catalogue of torture. The report also points the finger of guilt at the UK government's counterparts and other western 'democracies' for their collaboration in these CIA crimes.

The report - albeit in a censored form - as well as confirming a CIA torture programme which began after the 9/11 attacks in 2001, says the US spy agency repeatedly lied to the US Congress and other state departments about this programme. The interrogations, which in one instance killed a detainee, actually failed to produce usable 'intelligence gathering' to prevent new terrorist attacks.

But any notion that the CIA and its counterpart agencies in the West didn't kidnap 'enemies', hold them in secret prisons and torture them prior to 9/11 is, frankly, unbelievable.

This report and earlier evidence confirms what socialists have long argued; namely, that the role of state agencies like the CIA and MI6 is to advance and protect the strategic geo-political interests of their capitalist states. If that means carrying out assassinations, torturing opponents, or even overthrowing 'rogue governments', then the capitalist state, unless challenged by significant opposition political movements, will do so.

Indeed, the post-war history of British imperialism shows that the military and intelligence forces applied brutal methods to suppress insurgents and anti-colonial movements in Northern Ireland, Aden, Malaysia, Kenya, and more countries besides.

Barack Obama has publicly criticised the CIA's methods - while defending its "patriotic" role in 'protecting the nation'. No doubt Obama will want to pin responsibility for the unacceptable behaviour of the CIA onto the previous administrations of George Bush, who repeatedly stated the interrogation programme was 'humane and legal'.

US Republican politicians have criticised the report as 'inaccurate' and 'politically motivated' by the Democrats. But some CIA officials have not only spoken about the torture programme but have stated firmly that it was untaken with the full authority and agreement of Republican leaders in the Justice department and White House.

It is clear from the revelations of WikiLeaks and former National Security Agency operative Edward Snowden that these unaccountable state spooks remain engaged in all manner of skulduggery.

British prime minister David Cameron has attempted to shrug off implicit criticisms of MI5 and MI6 in the Senate report by referring to an official inquiry last year which, conveniently, found no evidence of British spies being directly involved in the torture or rendition of suspects (after 9/11 under Tony Blair's watch).

And concerns about breaching democratic rights were cavalierly dismissed by Cameron who said: "I'm satisfied that our system is dealing with all of these issues".

But not when it comes to establishing a UK navy base in Bahrain - a rotten feudal dictatorship that routinely imprisons and tortures its opponents.

Indeed the subjection of terrorist suspects to bestial methods of torture also underlines the gross hypocrisy of the Western leaders who condemn the jihadists in Syria and Iraq as being 'medieval barbarians'.

The victims of this torture deserve justice. Will the British government prosecute officials connected with extraordinary rendition and torture? Highly unlikely.

George Bush withdrew assent of the USA to the jurisdiction of the International Criminal Court.

Moreover, in 1998, despite the clear evidence of a Spanish judge that Chilean dictator Augusto Pinochet - who was in London at the time - had tortured and murdered opponents following the 1973 CIA-backed coup in Chile, Labour minister Jack Straw overturned the arrest warrant and allowed Pinochet to return home.

Only significant pressure exerted through working class industrial action and political campaigns will act as a counterweight to the undemocratic and brutal measures of capitalist states.

The role of state intelligence forces in capitalist democracies reaffirms Lenin's Marxist understanding that the capitalist state can, ultimately, be reduced down to "special bodies of men with prisons at their disposal".