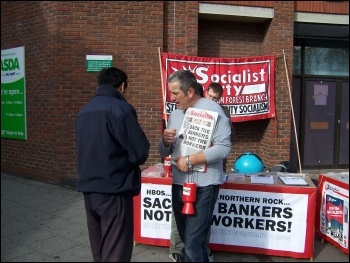 Socialist Party members will be trying to raise as much money and sell as many papers as possible in our 'collectathon' fortnight from 17 to 30 September.

Formula 1 magnate Max Mosley has donated £200,000 to right-wing Labour Party deputy leader, Tom Watson who is at the heart of attempts to oust Corbyn, deny Labour members the right to vote in the leadership election and purge Corbynistas from party lists.

The establishment is clearly well funded. The 99% need to get organised and financed too.

This 'collectathon' falls during the university freshers fair season. Young people starting college and university this year have only experienced a capitalist system of crisis and austerity.

But every pound they donate is worth far more than the likes of Branson and Mosley. We hope Socialist Party members will put on extra special campaign stalls at the weekends too.

Jeremy Corbyn rallies are the place where sellers of the Socialist have had the best response this summer. 250 copies were snapped up by the queues at the massive rally for Jeremy in Liverpool.

Every supporter can help with our fighting fund. In the North East a curry, raffle, and whiskey night raised more than £350! This quarter requires an extra push as we've increased our target to £30,000 to be able to fund a socialist and anti-austerity alternative. We don't take a penny from big business.