Sarkozy instigates ban on veil to boost his political ratings

What attitude should socialists adopt in defending women's rights? 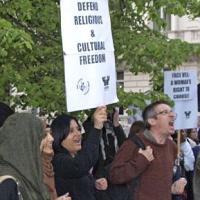 On 11 April 2011 the French government brought into force a ban on wearing full-face veils in any public place in France. The right wing UMP government framed this law on the pretext of 'security'.

But when it was first discussed in 2009, president Nicolas Sarkozy claimed to be defending women's rights: "The burka is not a religious sign. It is a sign of subservience, a sign of debasement... It will not be welcome on the territory of the French Republic".

However, Sarkozy's real level of 'concern' for women's rights is shown in the ongoing attacks on public services that he presides over and that millions of women in France are suffering from - attacks on jobs, pay, terms and conditions, services etc.

The recent pensions 'reform' will hit women harder than men, because most of them have taken two or three years off work for childcare, so '42 years of full time work to get a full pension' will mean in reality more than 45 years for most women.

Indicating that the target audience for the veil ban was the wider electorate rather than face-veiled women - who number less than 2,000 in a population of 64 million - the French government issued 100,000 posters and 400,000 leaflets with the slogan: "The republic lives with its face uncovered".

Sarkozy's motive for the ban most likely stems from his record-low poll ratings which are presently lower than those of far right National Front leader Marine le Pen, with whom he is trying to compete for support.

He faces re-election next year.

So once again Sarkozy is helping to boost racist and anti-immigrant ideology. It is not new for the French government to use the issues of immigration, national identity and security to help promote and mask its pro-big business and anti-working class agenda, as do most capitalist governments to one extent or another.

For instance in 2004, president Jacques Chirac introduced a ban on wearing religious symbols in schools, including headscarves. In 2009 and 2010 the French government scapegoated and deported over 10,000 Roma people to Romania and Bulgaria.

Muslims in particular have been a target for racism by many mainstream political parties across Europe, partly to serve their propaganda purposes in the 'war on terror'.

A law banning the burka has been passed in Belgium, though not yet enacted. State bans are also being considered in Italy, Spain and the Netherlands (in Italy despite the existence of a 1975 law that bans covering faces with anything that prevents identification by police).

In Germany, most states have passed laws that ban teachers from wearing headscarves in schools.

In Britain the issue of headscarves and veils surfaces regularly in the media but there have been no serious moves towards a state ban. Tory MP Philip Hollobone introduced a private members' bill last year proposing a ban and was supported by Nigel Farage of Ukip among others, but the Tories are divided on the issue.

Tory environment minister Caroline Spelman nauseatingly said after a trip to Afghanistan that "the burka confers dignity" and could be "empowering".

Turmoil on the left

Unfortunately, despite the draconian nature of criminalising or harshly penalising women for what they choose to wear, many leaders and members of left-wing organisations have supported the banning of Islamic veils and in some circumstances headscarves.

In France the Communist MP André Guérin and fellow Communists voted for the ban on the niqab and burka and the New Anti-capitalist Party (NPA) has been in turmoil over the issue of whether it should allow NPA members who wear even simple headscarves to stand as election candidates.

These mistaken positions are not taken from an intentionally racist standpoint. They are a one-sided defence of secularism and women's rights based on the idea that socialists should not appear to sanction any religious symbols and that face or head coverings degrade women and impair 'integration'.

A secularist stance is particularly strong in France, stemming from its history going back to the 1789 revolution. Polls indicate that a large majority of the population supports the ban on the niqab and burka, including many Muslims.

But legislating against face-veils and burkas will not aid the struggle against women's oppression. Rather, the route to improving their lives lies through united working class struggle for the right to good jobs for all with decent pay and the right to adequate benefits, affordable housing and low-cost or free basic services like energy, transport and childcare.

This is the position of the Committee for a Workers' International (CWI) to which the Socialist Party in England and Wales and Gauche Révolutionnaire in France are affiliated.

We completely oppose legislation that dictates what individuals can and cannot wear. We support the right for women to choose themselves whether or not they wear headscarves or veils.

However, we also strongly support the right of women not to be forced or coerced into wearing a scarf or veil by their families or communities or, as in Saudi Arabia and Iran, by the state.

While along with other socialists the CWI supports separation of the state and religion, we defend the right of any person to have religious beliefs and practice a religion without the capitalist state dictating what they wear in respect of it or oppressing anyone because of their choice.

Moreover, banning headscarves or veils will only be counter-productive. The number of women in France wearing simple headscarves or hijabs increased dramatically after Chirac's campaign against them in 2004.

Some women will suffer from having to withdraw from an educational institution that has banned their headscarf, or even from not being seen in public at all as could happen with a number of women in France now.

When it is a father, husband or brother insisting on a woman 'covering-up', banning it won't necessarily help those women; they may be forced to stay indoors or only go out if accompanied.

What they need are measures that would assist them in the direction of gaining social and financial independence, so that they can have freedom of choice on how they live and who with.

A further factor is that prohibition of head or face coverings allows right-wing Islamic organisations to pose as the defenders of the rights of Muslim women, when in reality those organisations have basic ideology that threatens women's rights and well-being (as do many other religious hierarchies).

Also, through their scapegoating of Muslims, veil bans tend to lead to an increase in racist harassment and attacks on Muslims. The often-cited pretexts for such measures, of 'terrorism' and 'security' are total red herrings, as the overwhelming majority of Muslim people condemn terrorist acts; and the police in most countries have powers to check people's identity and monitor their activities regardless of what they are wearing.

It's necessary to recognise that there are some jobs where a burka or niqab can be an insurmountable obstacle to certain activity or communication. If a woman wearing one is facing such work, socialists should argue for workplace adjustments if they are possible (as Socialist Party members in England have done in specific instances in the past) that would either enable her to adequately do the job while veiled or make her comfortable with removing it, for example by offering her a female-only room.

If this isn't feasible, then the employer should offer alternative work on the same overall terms and conditions, so that she isn't forced out of employment due to her choice of clothing.

There are many reasons besides religious commitment that lead a layer of Muslim women to wear headscarves, veils or burkas. For some it is to avoid sexual harassment, or to escape some of the pressure of being judged on their looks, or simply to feel safer.

For others it is a question of tradition, custom, pride or identity. Some adopt a headscarf as a gesture of defiance and protest against racism towards Muslims and against western imperialism's wars on Iraq and Afghanistan.

Whatever the reason, what to wear should be the choice of each individual. But the route to ending racism, intolerance, poverty and war is not through an individual attitude, but through the collective fight for a society that is free of all these consequences of capitalism, ie a genuinely socialist society.

A vital task of labour and trade union movements is to adopt a programme for such a society, one that will also make sure that all women have the means to decide themselves how they live, a crucial part of ending women's oppression forever.