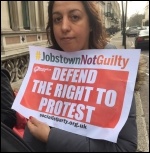 The campaign has gained the backing of Len McCluskey

The Trade Unionist and Socialist Coalition (TUSC) has added its support to an appeal to Jeremy Corbyn by socialist members of the Irish parliament (TDs).

Put MPs on workers' wages: 18% worse off. The Institute for Fiscal Studies calculates that UK households will have living standards 18% lower by 2021 than they would have been had the economic crisis never happened.

Defend the right to protest: "We are more akin to a banana republic, and the rotten nature of the Irish state has been exposed." These were the words of TD (MP) and Socialist Party member Ruth Coppinger in the Irish Parliament on 15 February as she rose to question Taoiseach (prime minister) Enda Kenny.

Up to 15 Tesco stores in Ireland took strike action on Valentine's Day 14 February after members of the trade union Mandate, which represents more than 10,000 workers at the company, voted 78% in favour of a walkout over contract changes

Short stories from other sections and co-thinkers of the Committee for a Workers' International (CWI), the global socialist organisation which the Socialist Party is affiliated to. CWI stands in Northern Ireland elections; socialists gather in Latin America; anti-sexism campaign launched in Belgium.

Northern Ireland goes to the polls, for the second time within a year, in snap elections to decide the make-up of its Stormont Assembly, on 2 March

Northern Ireland's power-sharing executive has fallen over the 'cash for ash' energy scandal. Voters will elect a new assembly on 2 March

Beginning with an important talk on the pivotal role of women in the Russian revolution and the lessons we can learn from this a 100 years on, 50 Socialist Party members from around the country attended a national women's meeting in London on 7 January.