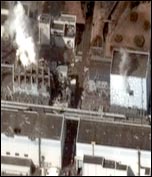 Fukushima I courtesy of Digital Globe

After Japan's tsunami disaster -: The earthquake off Japan's east coast and the giant tsunami wave that followed on 11 March has, at the time of writing, officially killed over 8,500 people with another 13,000 people still missing... 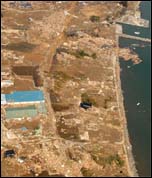 Exclusive report from Japan:
Take over the power and building industries!
Millions around the world watched, read and listened in horror to the reports coming from Japan on 11 March and the days that followed... 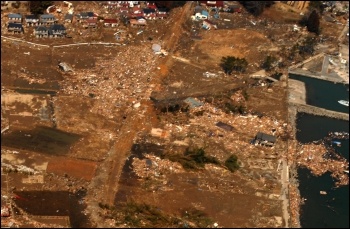 Japan: earthquake and tsunami: an aerial view of tsunami damage in Tōhoku, photo from Wikipedia

As we go to press the horrendous tsunami and earthquakes have claimed an estimated 3,000 lives in Japan. The final toll could be tens of thousands...

Earthquake could leave "tens of thousands" dead and nuclear threat

Japan: The massive earthquake that struck north-eastern Japan on Friday 11 March and ensuing destruction caused by one of the most powerful tsunamis ever witnessed was the "worst crisis since 1945" according to Prime Minister, Naoto Kan. Reporters in China, Hong Kong and Taiwan, from chinaworker.info, write.

THE EDIFICE of Liberal Democratic Party (LDP) rule has finally come tumbling down with the dramatic defeat it suffered in the Lower House elections on 30 August, writes Carl Simmons, Kokusai Rentai (International Solidarity), CWI in Japan.

City of Life and Death

THE FILM City of Life and Death depicts the Japanese Imperial army's infamous massacre of the Chinese city of Nanking in 1937, writes Rob Bishop.

The underground explosion of a massive nuclear bomb on 25 May of the North Korean regime brought it to the centre of world attention. Clare Doyle considers the motives of North Korea's ossified Stalinist regime

Lessons of the 1990s recession in Japan

ECONOMISTS AND political leaders are looking to the recent economic history of Japan with growing fear. Is the US economy also heading for a 'lost decade'? asks Jared Wood, Oxford Socialist Party.

World economy: IN THE second week of May there was a convulsion in the world financial system. Shortly after rising to near-peak levels, shares fell sharply on world stock exchanges, especially in so-called 'emerging markets' like India and Turkey. Lynn Walsh examines these events and exposes the instability of the global capitalist system.