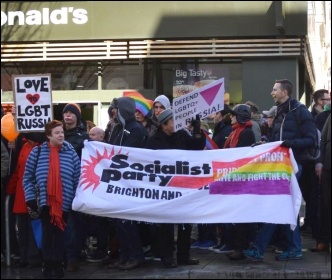 On Saturday 8 February, the first full day of the winter Olympics in Sochi, over 100 people in Brighton showed their solidarity with Russian lesbian, gay, bisexual, trans, queer and other people being oppressed as a result of Russia's anti-gay laws.

A letter from Ksenia Zhivago, a Moscow-based Russian LGBTQ+ activist, was read out. It highlighted how the Olympics have caused many problems for working class people living or working in Sochi, and how LGBT people are being used as a scapegoat for wider societal issues.

A last minute update was sent from Ksenia just before the demonstration began. It reported that activists demonstrating during the Olympics opening ceremony, by singing the Russian national anthem and waving rainbow flags on Red Square, had been detained by the police.

The demonstration moved to a McDonald's restaurant, where the group made clear their dissatisfaction at the Olympic sponsor's silence on the rising tide of homophobic violence in Russia.

The "To Russia with love, Brighton" campaign will continue - to find out more visit www.facebook.com/russiawithlovebrighton.

A separate demonstration will take place in London on Valentine's Day, 14 February, outside the Russian Embassy from 12 noon: bit.ly/sochi14demo