A vibrant array of support groups 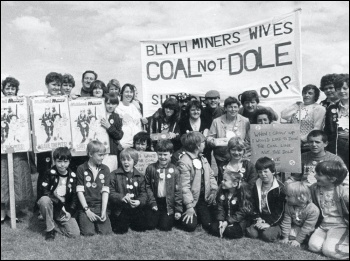 The great 1984-85 miners' strike ended 30 years ago next month. Dave Beale, chair of Chorley and Coppull Miners' Support Committee in Lancashire during the strike, explains the vital role of support groups.

In 1984-85 members of the National Union of Mineworkers (NUM) fought tooth and nail to stop Thatcher's plans for widespread pit closures and the decimation of mining communities.

Although the Thatcher government gained a major victory, the miners' defeat was not inevitable. Fatally, as Ken Smith shows in 'A Civil War Without Guns' both the Labour Party and TUC leaderships turned their backs on the miners.

But the enormous struggle that the strike unleashed against the Tory establishment clearly showed the potential for a united working class movement to transform society. Money and material donations for the NUM, the miners and their families came from many unions and sympathetic individuals. An important element in the strike was the vast network of local and community-based miners' support groups.

The National Coal Board's head of pit closures Ian MacGregor said early in the strike that many miners' wives were not supporting their striking husbands. This provoked a furious reaction from strikers' wives and girlfriends. They organised enthusiastic support for the strike and widely publicised it. This triggered the growth of what were first called miners' wives groups and then became more broadly based women's support groups.

Most women's support groups were not prepared just to limit themselves to the 'domestic' tasks their men often expected of them. They were as good at picketing, and organising meetings and protests as the men! Many such groups made a political statement that women had an independent role to play in the strike. Women Against Pit Closures was established as an important national body that helped coordinate the women's groups.

A diverse pattern of miners' strike support groups soon emerged; some were women's groups, others more broadly-based. They provided food to miners and their families, raised money, housed and assisted striking miners away on picketing duties or touring the country to raise support and funds for the strike, visited picket lines and attended meetings, rallies and demonstrations, often with their own banners. 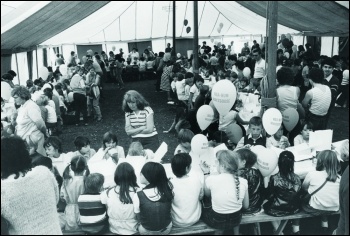 Activists in Hoyland in the heart of the Yorkshire coalfield were serving 1,600 meals in their village alone to strikers and their families, and joined miners on the picket lines when they could! Chorley and Coppull support group raised £26,000 in 12 months, spending most of it on providing weekly food parcels to about 80 striking miners who lived in its area but worked at Parkside Colliery.

It was set up jointly by the local Labour Party (supporters of Militant, forerunners of the Socialist Party, played a key role in the initiative) and the local Trades Council. Local striking miners and their families participated in the group, establishing Lancashire NUM recognition for it. Full support soon came from key shop stewards committees in local workplaces.

Outside the coalfields, many support groups were set up and twinned with one particular colliery. Such support groups were not necessarily based on traditional trade union organisation. There were students' miner's support groups, those led by the unemployed, and many community-based support groups in other countries. The recent film 'Pride' highlighted the impressive support provided by gay and lesbian activists.

Despite the support groups' invaluable role, however, the power to win the strike rested with the unions, the TUC and the Labour Party. Nevertheless, the tremendous achievements of the support groups demonstrated the potential for the fullest forms of class solidarity and socialist consciousness built from the bottom.

The longer the strike went on, the more it drew towards it wide layers of people, those aggrieved at work, the poor and unemployed, students, women, black and Asian workers, and gay and lesbian activists were increasingly brought together through the miners' support group network.

A genuine broadly based movement was being built, aligned with the working class and the sections of it that wanted to sweep the Thatcher government from power, hoping to see the beginnings of the struggle for a much better world.

The achievements of the support groups demonstrated working class people's ability to run their own lives and the society they live in. The strike also showed the need for a democratic, militant and mobilised trade union movement, alongside a mass socialist political party that could sow the seeds of revolutionary change and a democratic, socialist society.

National Union of Mineworkers' event, marking the 30th anniversary of the 1984/85 strike.

Celebrate the courage, strength and spirit of the miners and their communities on the 30th anniversary of the return to work after the year-long strike.

To book go to www.unityworks.co.uk/events

As the local Socialist Party placard said: "Why can't £300 million be found to save Kellingley, Thoresby and Hatfield pits while £66 billion could be found to rescue Lloyds Bank?"