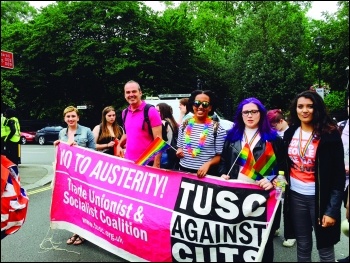 Annual Pride marches used to be radical, angry protests, aimed at normalising being openly lesbian, gay, bisexual or trans (LGBT). But over the past decade, these politics have been abandoned in favour of big business sponsors, turning it more into a parade than a celebration. This can make it markedly difficult for socialists to find an echo on these marches. But the recent political earthquake around the EU referendum and the LGBT-phobic attack in Orlando, transformed the mood at this year's London Pride on 25 June.

Young people in particular were attracted by our demands to kick big business sponsors out of Pride. They saw the commercialisation of Pride as a betrayal of its radical roots, and useless as a tactic for fighting oppression. The Orlando shooting has served as a brutal reminder of the violence faced by LGBT people everywhere, even in countries considered progressive on these issues. It's crucial that we take heed, and take steps to build a mass, united movement of LGBT people and workers. That starts with reclaiming Pride as a protest, not a parade.

Socialist Party demands for a general election to be called were also very well received. LGBT people have been disproportionately hit by austerity. They're far more likely to suffer from mental health problems, homelessness, violence and abuse, so it's no wonder they expressed anger at the Tories. We appealed to marchers as young, angry, working class people, not just as members of the LGBT community. Marchers took 700 Socialist Party leaflets, bought far more copies of the Socialist than previous years, and many expressed an interest in joining the Socialist Party.

While there is still much further to go in reinvigorating and uniting LGBT struggle, this year's Pride march was a small but significant step closer to achieving that.