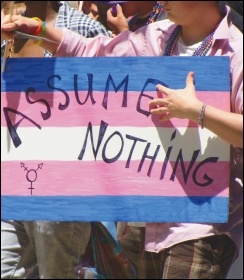 NHS staff, including one trust chief executive, called in September for a full debate on access to healthcare for transgender people. Discussion is a step forward - but nowhere near enough.

Trans people are those whose gender does not match the sex they were assigned at birth. They typically wait at least a year to access gender identity services. In some parts of the country, they can wait up to five years!

Gender identity services have been difficult to access since their introduction.

They are not consistently pro-vided. This leads to trans people having to travel the country to ac-cess specialist counselling or gender reassignment surgery.

Referrals are hard to get, due to outdated or incomplete procedures and poor knowledge of trans issues in the NHS at large. But with mass cuts to all areas of the NHS, specialist services are even harder hit.

This situation has a huge impact on trans people. Nearly half of trans adults report experiencing bullying at work, especially around the time of their transition. Trans people are at huge risk of suicide: over 59% under 26 have considered it at some point.

Mainstream LGBT rights groups, such as Stonewall, have slowly started to recognise the fight for trans equality. But a significant proportion of trans people have not needed to wait for any lead. In fact, calls for this debate might not have occurred without strong campaigning from trans activists.

However, the fight for fair provision of trans healthcare needs to go further than just a debate. To effectively defend trans rights to proper healthcare access means uniting with trade unions and campaign groups.

By reversing the cuts, kicking out the profit vultures and making the NHS democratically accountable, we can end discrimination against trans people in healthcare.