Labour Party and trans rights: united working-class fight needed for rights and resources for all 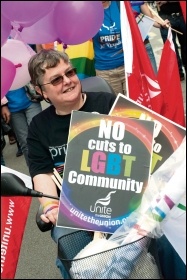 Working-class unity is vital to cut across capitalist divide and rule, photo by Paul Mattsson   (Click to enlarge)

The Labour Campaign for Trans Rights (LCTR) has intervened in the party's leadership contest, calling on candidates to back its 12-point pledge. Rebecca Long-Bailey and Lisa Nandy have done so.

The oppression trans people suffer must be fought. 81% of trans people fear and avoid certain social or public situations, such as gyms, public toilets and shops.

The struggle by trans workers and young people has been significant in raising the need for solidarity. The LCTR pledges show discussion is needed on what form that should take.

While LCTR raises some positive demands, it also unfortunately calls on Labour to "organise and fight" against organisations it considers "transphobic" such as Woman's Place UK (WPUK) and LGB Alliance, and for expulsions.

However, defeating divisive ideas requires offering a way to unite and fight all discrimination.

If Labour is to be transformed into a party that can defend trans rights specifically, and fight all discrimination, it must have an understanding of the origins of oppression that lie within unequal class society - and flowing from that the central role of the working class in ending it.

In 2016 the Tories launched a review into the Gender Recognition Act 2004 which included the right of trans people to self-identify.

Nearly four years on, the Tories have produced no reform and the 'debate' on the GRA has been falsely framed as a question of irreconcilable, competing rights between women and trans people. Unfortunately this has been the approach of the leadership of WPUK and others.

The Socialist Party opposes all forms of discrimination and defends trans people's rights, including to self-identify and to public services.

We also recognise that women's services are under enormous threat - from Tory cuts and the Labour councils who implement them.

A recent study found that 64% of those who seek shelter in a domestic violence refuge are turned away due to lack of funding.

The Women's Lives Matter campaign calls on the Labour candidates to demand that Labour councils take a stand, refuse to make cuts and fight for the money the Tories have stolen from our councils to defend services for all.

Unfortunately, this is not the approach of the Labour Campaign for Trans Rights or the groups which have emerged to oppose GRA reform.

WPUK is led by some senior figures in the trade union movement. But in its five founding demands does not point to a way to, or even the need to, fight austerity - of which the overwhelming burden falls on women. WPUK instead sows illusions in the government's ability to protect women's spaces.

In August 2017, the National Union of Teachers vice-president who became a leading member of WPUK wrote that granting self-identity was "likely to impact on society's ability to plan for and accommodate the needs of its population and the way it attempts to even out inequality".

But this society's ability to meet the needs of the different sections of the population comes down to who has the power to make such decisions - which class.

Capitalist society is composed of classes and based on the exploitation of the working-class majority by the capitalist minority, the boss class.

The capitalist class is unable to 'even out inequality' because the system it defends is an unequal system that prioritises profits over our needs.

It also has an interest in dividing the working class on race, religious, sexual orientation and gender lines to make it easier to maintain its rule.

The working class is not homogenous but made up of different layers and sections who suffer different forms of oppression alongside class exploitation.

But what makes the working class so important is its role in production - workers make everything and without them the bosses can't make their profits.

The working class has the potential power therefore to replace capitalism with a socialist alternative based on democratic planning of the economy to meet the needs of all.

In its effort to weaken working-class collective struggle, and to undermine our demands and aspirations, the capitalist class has always sought to divide workers.

It is a huge mistake of trade union and labour movement activists to assist them in this. Instead, it is necessary to draw out and build a united movement based on fighting all cuts, and for services and rights for all.

With regard to domestic violence services and refuges this starts with fighting for no cuts, no closures, but also adequate funding and an expansion of services for all who need them with decisions being made by democratic and accountable bodies of service users, service workers and the wider working class through the trade unions.

In a survey of domestic violence service providers by Stonewall, participants emphasised how thorough risk assessment processes are key to safeguarding against an incident of a violent man attempting to access services, while ensuring that all women receive the support they need.

The six-million strong trade unions, as the main mass organisations of the working class, can and have played a key role in fighting for the rights and public services of those who suffer oppression and discrimination under capitalism - from equal pay, abortion rights, legal rights for LGBT+ people, challenging racism, and more.

The trade unions and mass workers' parties have the potential to bring together all sections of the working class in struggle - if they develop a programme of fighting for rights and services for all.

It is democratic debate and testing ideas in the fight against cuts and for rights that are needed - not denunciations and proscriptions.

WPUK is attempting to appeal to women who want to save their services - with a programme that is seen by many as anti-trans rights, rather than fighting the attacks of the Tories and the bosses.

But exposing this approach for the dead end it is requires offering a socialist struggle alternative, not bans and 'no-platforming' of groups and individuals which will be used by the pro-capitalist right in the party against the fighting pro-working-class members.

The rate of LGBT+ hate crime per capita rose by 144% between 2013-14 and 2017-18. It is urgent that the labour and trade union movement takes the lead in building a movement against all forms of discrimination and for a socialist society in which we can be truly liberated from the backward ideas on which class society rests.