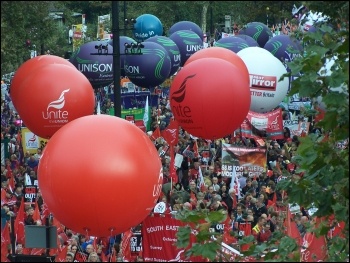 The workers' movement can break the deadlock in Westminster, photo Claire Job   (Click to enlarge)

On 3 September parliament returns from its long summer holiday, sitting for less than two weeks before it breaks again for the party conference season. With 'Brexit day' - 31 October - just two months away the MPs normal relaxing August has been interrupted by fevered plots and speculation about the way forward. Now the different sides face trying to turn their plotting into effective action. Whatever else results, one outcome will be the further discrediting of the capitalist politicians that dominate Westminster.

Unelected Prime Minister Boris Johnson has spent much of the summer 'talking tough'; posturing that he is prepared to carry out a chaotic no-deal Brexit. Britain's capitalist class are highly opposed to this, with its damaging consequences for their profits. They are clinging to the hope that Johnson's bellicose phrase mongering is a tactic and, following a few token concessions from the EU, he will take a new version of May's deal back to parliament. Even were he to do so, however, the weakness of his government and the splits in the Tory Party would make it difficult to get it passed. No deal is therefore looming.

Pro-capitalist MPs from all parties who want to prevent Brexit - or at least ensure it is a 'Brexit in name only' - are scrambling around for parliamentary devices to stay Johnson's hand. Their own hands are stayed, however, by the one thing they fear more than a chaotic Brexit - a Jeremy Corbyn-led government lifted to power by a popular surge. While Corbyn's programme is actually very modest, the capitalist class and its political representatives are terrified by the enthusiasm it could create among millions of working and middle-class people who have suffered endless austerity.

Hence the contortions of pro-remain Tories, Liberal Democrats and pro-capitalist Labour MPs who are desperate to defeat the prime minister, but even more desperate to prevent the leader of the opposition coming to power.

It therefore seems possible that they will, at least initially, hold back from supporting a no-confidence vote in Johnson, instead trying to rely on parliament voting to demand that Johnson asks for an extension of Article 50. The rather large problem with this is that it is the prime minister, not parliament, which legally has to ask for an extension of Article 50. Realising that Johnson might respond to such a vote by refusing to ask for the extension and instead 'going to the people' by calling a general election, Liberal Democrat leader Jo Swinson has switched her attention to demanding that, in such circumstances, Labour should not vote for a general election!

Her excuse for this is that Britain could crash out of the EU while an election is in progress. Yet Corbyn has offered a solution to these 'insurmountable' problems - a successful vote of no confidence in Johnson, then a very short-term minority Labour government extending Article 50 and calling a general election. Swinson and the Liberal Democrats were prepared to be part of a vicious pro-austerity government with the Tories for five years, but won't support a Corbyn government for five weeks!

Fight for a general election

These events drive home the central issue that the Socialist has been campaigning for throughout the summer - the urgent need for the workers' movement to launch a mass campaign demanding a general election and the coming to power of a Corbyn-led government with a socialist programme.

Such a campaign could shatter the parliamentary manoeuvres of all stripes of capitalist politician and transform the political situation. Labour could win by a landslide, provided that it adopted a fighting socialist programme.

The 2017 manifesto could be a starting point. But the manifesto should also include, for example, reversing all cuts to council services, scrapping universal credit, and a pledge to nationalise Honda Swindon, Ford Bridgend and British Steel under democratic working-class control, along with any other companies who carry out closures and job cuts in the name of Brexit or otherwise.

A pledge to renegotiate Brexit in the interests of the working class - refusing to accept the EU's pro-privatisation, pro-austerity laws - would form an important part of such an approach. This should be combined with nationalisation of the major corporations and banks to really take the levers of power out of the hands of the capitalist saboteurs who would otherwise do all in their power to prevent the implementation of pro-working class policies.

If such an approach is not adopted, however, the current situation - where many workers see no difference between Corbyn and the pro-austerity politicians - could continue or worsen. There is a real danger that Corbyn's anti-austerity policies, which initially generated huge enthusiasm, are drowned out by the babble of parliamentary manoeuvres.

If this were to happen, Corbyn and the Labour left would bear responsibility for it. In the vain hope of winning unity in the parliamentary Labour Party, they have made repeated concessions to its pro-capitalist wing, not least campaigning for remain in 2016, instead of fighting to lead the elemental cry of rage that was the working-class vote for Brexit in a socialist and internationalist direction.

It has most often been the pro-capitalist Labour MPs who appear as party spokespeople. This is now being compounded by John McDonnell and others seeming to drift to a 'remain in all circumstances' position, rather than arguing that a Labour government would renegotiate Brexit in workers' interests.

Of course, no matter how many concessions are made, the Blairite wing of the Labour Party remain unreconciled to Corbyn and determined to remove him when they get the opportunity. That is why another essential - and well overdue - aspect of the fight for a general election is the launching of a serious campaign to transform the Labour Party into a workers' party.

This would mean transforming the structures of Labour so that it was brought under the democratic control of its working-class members and supporters, particularly via the trade unions and a return to the kind of federal structure Labour had when it was founded.

No to the false 'national unity' road

The immediate starting point of such a campaign, however, is to launch a serious battle for a general election. Every gain Corbyn has made has been as a result of a mass surge from below. It is mobilising the working class, not parliamentary manoeuvres, that Corbyn should put central.

Of course, even if Corbyn stands firm against the false 'national unity' road, this still may not prevent a swathe of right-wing Labour MPs breaking ranks to support such a government. This would be very dangerous for the capitalist class, however, because the splitting away of the Blairites would create new possibilities for Labour to develop as a mass workers' party within which the ideas of socialism could find an ever-wider audience. At the same time, the record of the so-called national unity government would likely discredit all those capitalist parties that had participated in it.

It is not unlikely, therefore, that after further weeks of manoeuvres and prevarication the pro-capitalist, pro-remain MPs will have no choice but to back a no-confidence vote moved by Corbyn, and then to vote for a general election.

Even if this is how events unfold in Westminster, it does not negate the urgency of Corbyn and the workers' movement launching a mass campaign for a general election. Doing so would prepare the ground for a general election victory by starting to put the demands of the working class central, clearing aside the 'fog' of Brexit. It would also increase the confidence of working-class people to fight for their collective interests, regardless of the outcome of the Brexit crisis or the character of the next government.