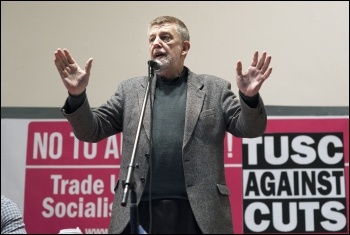 The media - and the Electoral Commission - must reflect on their role in creating a 'climate of hate', says TUSC

From a TUSC press release:

With EU referendum campaigning resumed, the Trade Unionist and Socialist Coalition (TUSC) today appealed to broadcast media workers to consider the role that the organisations they work for have played in creating the climate of hate that formed the backdrop to the shocking and horrific murder of Labour MP Jo Cox last Thursday.

The Electoral Commission was also criticised by TUSC - a left-wing exit group - for its decision early in the EU campaign to give political authority to the reactionary Vote Leave organisation, led by Tory Brexiters Boris Johnson, Michael Gove et al, when it was under no legal obligation to grant 'official designation' status - and millions of pounds of public funds - to any campaign group at all.

Dave Nellist, the former Labour MP who is now the chair of TUSC, said:

"People are still in shock at the brutal murder of Jo Cox and, with campaigning now resuming for Thursday's ballot, must be hoping for a different kind of debate. But part of achieving that will be to understand how what has rightly been described as a 'climate of hate' has developed around the EU referendum.

"The primary responsibility lies with the pro-big business politicians on both sides of the EU debate, how they have framed the terms of the debate and the bigoted and inflammatory rhetoric that has been used by them and in the tabloid media.

"But we also need to look at the role of the broadcasting organisations, still the most powerful media, and official institutions like the Electoral Commission, who have gone along with and reinforced that framing".

"Right from when the referendum was announced it was clear that the pro-Remain establishment wanted to create a narrative that all those who opposed the EU were one reactionary lump. It would be easier, they felt, to deal with the policy positions of the reactionary Leave campaigners, who as pro-big business and pro-austerity politicians themselves operate within the same political and economic framework as the Remain campaigners.

"This meant a concerted effort to bury the fact that there were alternative voices in the traditions of the late Tony Benn and Bob Crow - not just those in TUSC but in the wider working class movement - who opposed the EU from a completely different, anti-austerity, socialist and internationalist standpoint.

"The pro-Remain Guardian columnist Martin Kettle summed up the strategy when he wrote back in December, 'if voters come to see the Brexit option as a step towards a Nigel Farage universe, then the result this time could be much closer to 1975's two-to-one pro-EU outcome than currently seems possible' (18th December 2015).

"But the consequences of framing the debate in this way were all too predictable. It served to boost the legitimacy of the reactionary Leave politicians and their racist arguments in front of the millions of working class voters who are determined to vote against Cameron's hated government - and the capitalist establishment generally - for a range of reasons far wider and diverse than the single question on the referendum ballot paper.

"Of course, bolstering those who are now the backbone of the reactionary Leave campaigns didn't start with the EU referendum debate. Notoriously, Nigel Farage has been one of the most regular panellists on BBC's Question Time since 2009, well before UKIP had parliamentary representation. But their profile has been ramped up out of all proportion in the EU debate.

"This year, for example, the BBC awarded UKIP, with just one MP, three party political broadcasts outside elections (while giving none to the Green Party even though it also has one MP), while Farage was chosen as the 'spokesperson for Leave' in ITV's debate with David Cameron. Which senior figures in the media organisations took these decisions and how do they justify them?

"One factor that no doubt will be used to excuse the broadcasters' promotion of the reactionary Brexiters was the decision of the Electoral Commission to choose them as the 'official' Leave campaign. But this did not have to happen.

"TUSC wrote to the Electoral Commission calling for them not to make any lead campaign designation for Leave and asking for a meeting to outline the case for this (see http://www.tusc.org.uk/17197/30-03-2016/tusc-sends-formal-letter-to-election-watchdog-dont-back-ukip-amp-tory-eu-outers ). The legislation explicitly allowed the Commission not to designate a campaign organisation on one side or both.

"Our petition backing this call was signed by trade union officials, including national presidents and executive committee members, representing hundreds of thousands of trade unionists. The PCS civil servants union also wrote to the Electoral Commission with the same demand (see http://www.tusc.org.uk/17191/12-03-2016/pcs-nec-boost-for-campaign-against-public-funding-of-ukip-and-tory-eu-outers ).

"TUSC itself has been the sixth-biggest presence on ballot papers in elections for the last four years - we have polled over 350,000 votes since our formation in 2010 - and, for example, in Liverpool we have outpolled both the Conservatives and UKIP in the last two mayoral elections in what is Britain's eighth biggest city.

"But the unelected Commissioners peremptorily rejected this call - with no explanation - and even TUSC's request for a meeting to discuss our concerns. As a result of their decision the divisive messages of the reactionary Vote Leave group - their referendum broadcast blaming the NHS crisis on migration rather than underfunding and privatisation, the freepost leaflet etc - were subsidised by over £10m of public money.

"The Electoral Commissioners too should reflect on their contribution to how the EU referendum debate has developed".