Editorial of the Socialist, issue 907 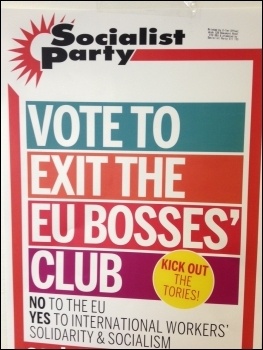 Following the terrible and shocking murder of MP Jo Cox in West Yorkshire, questions have been asked about the role played by racist propaganda during the EU referendum campaign. Her attacker, Thomas Mair, when asked for his name in court, said "death to traitors, freedom for Britain".

In the Observer on 19 June journalist Mark Townsend referred to West Yorkshire's "post-industrial social landscape" as being the background to the existence there of at least seven far-right groups. These are more grouplets in reality, as they have very small activist cores. But in the absence of a left-wing pole of attraction they have received some tacit backing a bit beyond their activist layer, mainly in the forums of social media.

Without doubt the relentless right-wing propaganda on immigration from both sides of the EU referendum debate, and on the threat of jihadist terrorism, has helped the fortunes of those odious far-right organisations.

Guardian columnist Polly Toynbee, on the day following the shooting, patronisingly acknowledged that "there are many decent people" for EU exit. But then in promoting the Remain camp, she went on to place all the blame for racism on exiters "whose recklessness has been open and shocking. I believe they bear responsibility, not for the attack itself, but for the current mood: for the inflammatory language, for the finger-jabbing, the dog whistling and the overt racism".

Certainly the scandalous "Breaking Point" poster promoted by Ukip leader Nigel Farage, showing a queue of refugees next to those two words, was just one of many outrageous interventions from the pro-capitalist Brexit campaigns.

However, whipping up racism has come from the big business representatives on both sides of the debate. On the one hand Cameron's government has pursued racist immigration policies, pledged immigration curbs and attacked welfare benefits for migrants. On the other hand it has encouraged immigration to suit the needs of big business, while at the same time fuelling division by slashing public spending on vital services.

On other issues too, the leading right-wing Remain advocates have matched the excesses, slanders and untruths of the right-wing Brexiters. Tory donor Alexander Temerko supports remaining in the EU but attacked George Osborne: "I cannot support him. Business has lost trust in the chancellor because of the big manipulation of figures in the referendum and the very strange statements - so aggressive and without proper evidence - about what will happen if we leave the European Union".

His remarks showed how the deep divisions within the Tories have not just grown between the Remain and Leave sides and among the leavers (with defections taking place from that camp) but also within the Remain side.

The official Remain campaigners were wary of directly citing the tragic death of Jo Cox to attempt to further their case, for fear of a backlash. But this didn't stop them from trying.

For instance, following the killing, a letter was sent to the Observer signed by leading individuals from all three main establishment parties, plus the Green Party's Caroline Lucas, former TUC leader Brendan Barber, former CBI director general Richard Lambert and a few others. It began: "We are living in worrying times, with our society at risk of becoming more and more polarised and with blame, grievance and division on the rise." They concluded that by staying in the EU "we have a chance to reject division, isolationism, and blame. To choose cooperation..."

This was yet another example - of many - during the referendum campaign where labour movement and Green figureheads have shamefully chorused in unison with Tories and other austerity-drivers and spokespeople of big business to promote the bosses' EU.

With Cameron hoping that leading labour movement representatives will save his skin in the final days before the vote, the Remain team in the 21 June Wembley stadium debate is TUC leader Frances O'Grady and London Labour mayor Sadiq Khan, debating in alliance with Scottish Tory leader Ruth Davidson.
The terrible murder was even enlisted to help promote this kind of cross-party campaigning and blurring of class boundaries; Andrew Rawnsley in the Guardian, among others, approvingly noted that Jo Cox had worked with Tory politicians and other opposition parties in a 'consensual' and 'collaborative' manner.

A left-wing voice for working class interests has been given no space in the media to argue for Brexit on the basis of developing solidarity and cooperation across Europe between working peoples and ending austerity across the continent.

Since the tragic shooting, the Trade Unionist and Socialist Coalition (TUSC) - which the Socialist Party is part of - has called on the electoral commission to reflect on its role in giving political authority to the reactionary Vote Leave organisation and so helping to create a "climate of hate".
TUSC also rightly criticised the broadcast media for refusing any platform for TUSC and others who stand in the traditions of the late Tony Benn and Bob Crow - opposing the EU from a socialist and internationalist standpoint (www.tusc.org.uk/17287).

Following Jo Cox's death there has been denunciation in the media of the low regard in which politicians of the main parties are held - their overall unprecedented unpopularity. Polly Toynbee let rip: "This attack... occurs against a backdrop of an ugly public mood in which we have been told to despise the political class, to distrust those we serve ... Contempt for politics is dangerous and contagious, yet it has become a widespread default sneer."

Rawnsley, when decrying the reactionary Brexiters' lies, went so far as to say: "the overall effect has been to depress respect for politicians on both sides" - ie, he absolved the likes of Cameron and Osborne for responsibility for their own unpopularity during the referendum campaign.

The Socialist Party never hesitates to condemn abuse and personal threats against politicians of any party, including the frequent appalling physical threats made against women MPs on social media. But it is completely another matter to engage in trying to rehabilitate the standing of politicians who are justifiably hated for imposing spending cuts that drive down living standards. On the contrary, they must be politically opposed every step of the way, their ideology countered and their elected positions contested by anti-austerity candidates.

Anti-establishment working class people have forced their voice to come through in the opinion polls, against the bosses' EU and supporting a Leave vote. Most are repelled by racism, but nevertheless they have been derided and maligned by Remain camp commentators for being 'uninformed' and prey to the likes of Ukip.

Particularly vitriolic was the Observer's Nick Cohen, who disgracefully labelled this layer as succumbing to "paranoid populism," with "the final mobiliser of paranoid opinion: racism, the oldest and most effective recruiting sergeant there is." He added that they "black out alternative points of view" and have "willingly locked themselves in maximum-security prisons of the mind, from which there is no escape." How contemptuous and condescending!

It took Will Hutton in the same newspaper to touch on reality when he wrote: "millions of British, especially the less well-off, left behind in the cities and towns all round the country, are so unimpressed they want to leave [the EU]." Pro-EU advocates give "the arguments of the elite, they say."

This is not just the mood of a large layer of British workers; a recent Pew study showed a big drop in support for the EU across a number of its member states over the last year. Only 27% of the Greeks, 38% of the French and 47% of the Spanish have a favourable opinion of the EU. Pew's figure for Britain was 44%.

Whether the referendum result is Remain or Leave, it's clear that either outcome will have major repercussions in Britain and across Europe. "The idea that [the] European project is always 'more integration' has been widely abandoned", commented Jonathan Hill, Britain's EU Commissioner.

And more and greater turmoil is certain in Britain's main pro-capitalist parties. On the same day as the mortal attack on Jo Cox, the Tooting byelection took place because Sadiq Khan had resigned that seat to become London mayor. Labour more than doubled its majority, in what was the fourth byelection it has held comfortably. This again disproves the lie that Labour is unelectable with an anti-austerity leadership.

Jeremy Corbyn has unfortunately toed Cameron's line and that of Labour's right wing, missing the opportunity to lead a mass working class-based anti-EU campaign that could have played a major part in cutting across the "well of hatred" that he spoke of when he visited the spot where Jo Cox died.

Only defying the rule of Labour's right wing will enable him to secure and develop his standing among working class people and the role that he could play in helping to transform the political landscape of Britain. Yet in one way or another, working class people will be compelled to rapidly build political representation, to seriously challenge the escalating inequality and degradations under capitalism and put forward a socialist alterative.