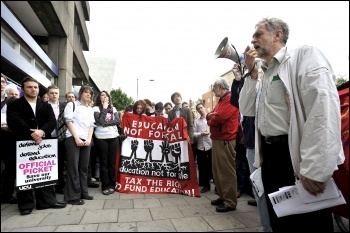 Can Jeremy Corbyn's challenge help to develop the socialist left?

There are some who have perhaps now renewed hope that, after decades of disastrous Labour right-wing rule, politically and organisationally within the party somehow the pendulum could begin to swing back towards the left as a result of Jeremy's challenge.

We wish Jeremy well - we hope that he gets the maximum number of votes and, in the unlikely event that he wins, we would welcome that. But over and above this, we hope that a discussion around the issues he raises - opposition to nuclear weapons and to Trident, renationalisation of privatised industries like rail, etc., opposition to austerity, an alternative left programme - will lead to a numerical strengthening of the left and generate renewed interest in socialism particularly amongst young people.

But we do not believe that he will succeed in reclaiming Labour as a political weapon for the workers' movement. Any attempt to foster illusions that his challenge could do this, is a dead end. The process has gone too far, transforming Labour into a British version of the Democrats in the USA.

The expunging of Clause IV Part 4 of Labour's constitution, which enshrined the movement's socialist aspiration, and the erosion of the trade unions' role within the party, are not of recent vintage but go back to the 1990s. They were preceded by the wholesale persecution - including expulsions - of the left for standing up to the Tories, fighting the poll tax, and so on. Labour councils have 'passed on' savage cuts, often without lifting a finger to protect workers.

As the New Statesman has pointed out, Jeremy Corbyn only managed to get on the ballot paper because of a "nail biting" last-minute decision of some on the so-called Labour 'centre right' to "lend their votes" to him for their own cynical political reasons.
The New Statesman confessed: "All that has happened is that a serious, principled left-wing candidate has been able to run, not because of the strength of the Labour left, but because of a combination of public campaigning... and the charity of some of Labour's more moderate Labour MPs."

The danger of accepting this 'charity' could yet be further delay in workers drawing the obvious conclusion from the consistently rightward direction of Labour, that it is now an urgent task for the unions and the working class to take the necessary steps towards a new mass workers' party. The vote-lenders quite consciously wish to burnish the image of the Labour Party as a place within which socialists and the left "still have a place", as spear carriers for an unreconstructed Labour right.

This is underlined by the political positions of the three main contenders for the Labour leadership. Andy Burnham who, it is rumoured, the majority of trade union leaders support, wants to "combine the best of Tony Blair and Ed Miliband"! (Observer, 14.6.15). What "best"? The murderous Iraq war, which Jeremy Corbyn has denounced, or the opening of the door to privatisations which PFI represented?

Ed Miliband with his programme of austerity-lite and support for a mythical 'progressive capitalism', despite a few radical demands was situated essentially on the same political ground as Blair and Brown. And let us remember that these electoral 'wizards' managed to alienate and lose over 4 million Labour voters from 1997 leading to defeat in 2010 and this year.

Moreover, Burnham was jeered at the GMB conference because he refused to oppose the Tory government's vicious welfare 'cap', as did Yvette Cooper. Even the pro-Labour Paul Routledge in the Daily Mirror revealed that Burnham had begged for tea at Buckingham Palace with the Prince of Wales and signed himself off: "I have the honour to remain, Sir, Your Royal Highness's most humble and obedient servant." After which, Routledge commented: "What a creep"!

So far to the right are the candidates, with the exception of Jeremy Corbyn, that even right-wing Unison general secretary Dave Prentis semi-seriously warned at his union conference that Unison "will review its links with Labour if it drifts towards the right". This is an indication of the pressure of the ranks on even remote and bureaucratised union leaders. There is a limit to the anti-worker, pro-capitalist positions that will be tolerated.
It also indicates the pressure for a new beginning for the working class outside of the Labour Party. Dave Prentis will not be in the vanguard of this movement, but it will come from below.

US campaign of Bernie Sanders

There are some parallels with what is happening in the US at the present time where radical left figure Bernie Sanders is running a campaign denouncing the rich and the massive inequality which corrodes US society. This has succeeded in electrifying workers and young people, even affecting Hillary Clinton's campaign - pushing her to the left, in words at least - for the Democratic Party's nomination for the presidency.

US Marxists have welcomed his campaign and are energetically participating in it but at the same time they criticise Bernie Sanders for remaining within the framework of the discredited Democratic Party, a political arm, along with the Republicans, of the capitalists in the US.

At the same time, they have also suggested that his campaign should have the aim of mobilising the maximum number of workers and youth, primarily outside the Democratic Party, not to prop up this discredited political weapon of the billionaires.

It should become the basis of a new mass left formation which can offer a real political alternative for the US working class who are open to such an appeal, as the tremendous support for Socialist Alternative's Kshama Sawant in Seattle demonstrates.

The same applies to the Labour Party in Britain, which has been transformed from a workers' party at its base, but with a pro-capitalist leadership into an out-and-out 'pro-business' capitalist outfit. This is manifested primarily through its political programme but also in the organisational methods through which the leadership contest is to be run.

It has more the character of a 'primary' in the image of the US. In the past, the active members and organisations of the party were the ones who democratically decided policy and selected the candidates.
This has been completely undermined and watered down by the so-called 'reforms' of the Labour right, culminating in the Collins Report.
This effectively eliminated the trade unions' organised presence in the Labour Party. They were still expected to cough up millions of pounds - £11 million in regular donations in 2014 even before the general election, for which Unite alone made special donations of £3.5 million - while their power was completely neutered.

This has now been taken much further in the farcical rules for this election leadership contest.

In national newspapers, Labour has resorted to publicly advertising: "Your choice. Shape the future. Who should lead the Labour Party? Turn your opinion into a vote just by sending a text... If you share Labour values and if you want to see the best Labour Party possible, help choose our next leader... Register as a Labour supporter now for £3 and have your vote in the leadership contest" (The Independent).

So anybody, literally anybody, who can text and pay a measly £3 can decide who is to become the leader of the Labour Party. Not content with having their own party, the Tories, and their preferred leader Cameron, want to be able to determine the outcome of the selection of the leader of the Labour Party as well! The rules under which this leadership contest is conducted are ideal for them.

This is a perfectly fashioned weapon - for instance, of the most venal capitalist paper, the Sun, who described Jeremy Corbyn as a "terrorist loving lefty" - to literally select the leadership of the Labour Party; not indirectly as they did in the past but more directly, through urging support, with massive publicity, for their preferred candidate. This is akin to the buying of votes!

After all, Simon Heffer in the Sunday Telegraph recently wrote: "The brutal truth: there is no need for a traditional workers' party any more." From its inception at the beginning of the 20th century the capitalists were hostile, fearing an independent workers' party, the Labour Party, and strove by every means to undermine and eventually extirpate it.

They eventually succeeded through the medium of Blair and Brown but it seems that even this is not enough; the remaining shell of the Labour Party must be destroyed, the working class politically further dispersed without their own party.

Jeremy Corbyn's campaign, despite its good intentions, will not resuscitate the Labour Party. What it can do however is to help prepare a significant left force, mostly from the heavy reserves of the trade unions, that can engage in debate and discussion, raise the level of understanding and prepare for the emergence of a real socialist left which can form the backbone of a new mass political force for the working class.

Its programme must be unashamedly socialist but also at its heart must be a strategy of action, able to reach working people and mobilise them to confront capitalism, and above all, at present, the Tory government. It is not sufficient to be in opposition to austerity, planned poverty. How do we organise to defeat these attacks on the working class on a national and local level?

For instance, Jeremy Corbyn should make a direct appeal to all Labour councillors to resist the cuts that are coming from Osborne and Cameron, not just by a show of hands in councils but to throw down the gauntlet to the government by adopting no-cuts 'needs' budgets.

Nationally, the TUC and all the main unions must match the words of opposition to the government's attacks on the unions - through the restrictions on ballots and changes to the political funds, the further slashing of public expenditure, etc, with an immediate decision for a one-day general strike to follow the demonstration on 20 June.

Jeremy Corbyn should be to the fore in making demands of this character and then, if the leadership election results in 'more of the same', a continuation of Blairism, whether it be Kendall, Burnham, or Cooper, he should draw the obvious conclusion and break from historically obsolete Labour and help to found a new mass force.

This version of this article was first posted on the Socialist Party website on 19 June 2015 and may vary slightly from the version subsequently printed in The Socialist.