"It is important that we continue to campaign, but in doing so fully analyse and dissect what went well and what didn't"

Left Unity, the broad left in the PCS, voted for Chris Baugh to be its candidate for AGS 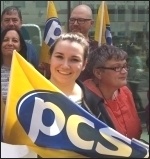 Profit-hungry chancellor George Osborne will damage public finances by privatising the Land Registry and other public assets. A new report has found ongoing income would outstrip the sale's windfall.

PCS leads the way in fightback against Tories

What a difference a year makes! Last year's PCS (civil servants' union) conference took place in the immediate aftermath of the Tory election victory. All the pessimists in leading positions in the labour and trade union movement shied away from a fight against what they saw as an all-powerful government.

Save BIS Sheffield: The Tory government wants the complete destruction of the civil service - its latest attack could see more than 600 government buildings close throughout the UK.

At 5pm on the evening before parliament recessed for Easter, plans to consult on the proposed privatisation of Land Registry were sneakily released by George Osborne's office.

PCS action stops sell-off: Workers have been informed that privatisation will not be happening within this term of government

On 14 and 15 May, PCS members working in Land Registry (LR) responded overwhelmingly to a call for strike action 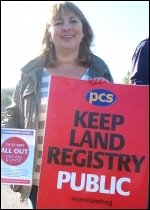 Taking advantage of the sun, pickets had organised a gazebo and were preparing a barbecued breakfast to start their 48-hour action on full stomach

TFL strike: RMT, TSSA and Unite took joint strike action across Transport for London (TfL) for the first time in response to a threatened freeze on pay and pensions

PCS members working for the Land Registry will hold a two-day strike against privatisation, job cuts and office closures on 14 and 15 May

Battle for jobs in Land Registry

On 18 July PCS members in Land Registry took part in our third walkout over pay and in support of our comrades in other PCS groups and other public-sector unions, writes The aims of our campaign are to:.