On the morning of 10 October the Tory government announced it was launching a website to show the widespread racial inequality in Britain. To many this will seem like a sick Black History Month joke.

An historic "turning point for the world". This is how US President Barack Obama and other top politicians referred to the 31-page climate agreement adopted by 196 governments in Paris.

Over 40 people crammed into Housmans Bookshop in north London on 27 March to hear a debate between the Socialist Party's Pete Dickenson and Derek Wall from the Green Party, writes Neil Cafferky.

This important and timely new pamphlet (published on the eve of the 'Earth Summit' in Johannesburg), analyses the causes and scope of environmental destruction across the globe and asks what is the way forward, writes Pete Dickenson.

There are many variations of the Green and environmental movement agenda, so any categorisation must be approximate and recognise that there is overlap between them...

Green growth proponents can be divided into two camps, those advocating 'hard' and 'soft' sustainability... 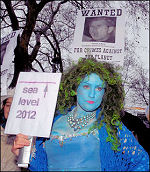 On the climate change demonstration in 2007, photo Paul Mattsson

Can the Greens help provide a left alternative?

The Green Party is standing more than 300 candidates in the general election. It believes it has a chance of getting one of its two MEPs, Caroline Lucas, elected to Westminster in the Brighton Pavilion constituency. Sean Figg and Judy Beishon explain why, fundamentally, the Green Party is not offering a way forward for working class people. 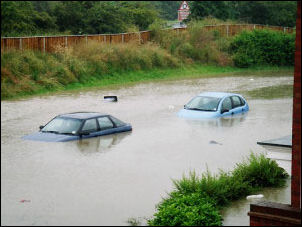 DESPERATE TO arrest his precipitous decline in the opinion polls, Gordon Brown has announced an incentive scheme to give people up to £5,000 towards the cost of trading in their old car for an electric one, writes Ken Douglas.

ONE of the Green Party candidates who stood in Telegraph Hill ward, south London in the 2006 local elections appears on the list of alleged BNP supporters recently leaked to the media, writes Clive Heemskerk.

Is the Green Party heading left or right?

PETE DICKENSON asks: are socialists like Derek Wall just giving a left cover to what remains a pro-establishment capitalist party, in action if not words...

Do you have to be red to be green?

The science on global warming is unanswerable now - the danger is that it could develop much more rapidly...

HAS US president George Bush, the die-hard neo-conservative former Texan oil man, gone green? His state of the union speech attacked his country's "addiction" to imported oil. Instead, he proposed all manner of alternative...

European Greens Unite - But Are They A Radical Alternative?

Die GRÜNEN, Les Verts, the Green Party - the German, French and UK Green Parties, along with 29 other European Green parties, are now one party standing on one platform...