...so let's give him one at schools and colleges around the country!

Many young people see Tony Blair as a poodle to the foreign policy of warmonger George Bush.

So last weekend 10 London ISR members turned up at Downing Street with a huge dog bone for Tony "the Poodle" Blair. 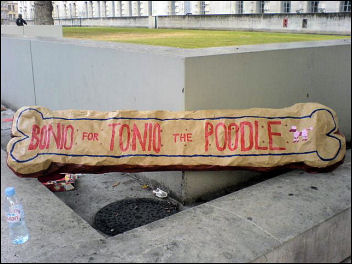 Blair may also be getting some dog biscuits through the mail this week as we handed out little packages with a Bonio for Tonio addressed to 10 Downing Street to all the people who are disgusted with his support for US imperialism, and its wars in Iraq and Afghanistan, and Israel's onslaught in Lebanon. 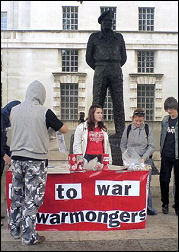 As well as generating a laugh with the stunt there was a lot of interest in our leaflets on the Middle East crisis and some young people stopped for long discussions about the situation there.

We then had a meeting in a café with young people who were interested in finding out more about ISR and the Socialist Party, discussing everything from socialist ideas to the environment and women's rights.

One person agreed to join ISR and the Socialist Party and is interested in setting up an ISR group in her college.

We found that this stunt was very useful in discussing with young people - other areas could consider using the Poodle Stunt for the new term.

Make your plans now for the first week of the new term. With the national anti-war demo on 23 September we will be going to the students in the sixth forms and further education colleges to build the anti-war movement.

We also need to meet and discuss the socialist alternative with all of those young people who are not only fed up with the warmongers but also with the system that creates war, poverty and exploitation. 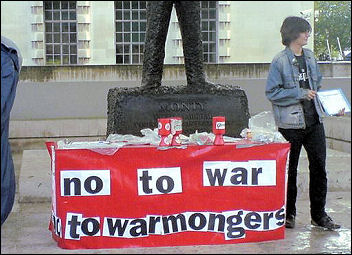