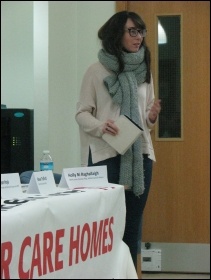 Paul Couchman, Staines Socialist Party and Save Our Services in Surrey

Given the absence of a local Momentum group, Staines Socialist Party decided to host a meeting on 11 February to discuss the Corbyn phenomena and to invite all those interested in a real anti-cuts, socialist movement to come along.

All agreed on the need for Momentum to be inclusive and open to non-Labour Party members and on its potential for growth if it was. There was a real mood of optimism at the packed meeting, full of energy and enthusiasm. Staines has never seen anything like it!

Holly, a local BMA junior doctors' rep, fresh from her picket line at St. Peters Hospital the day before, said how nice it was to hear all about this great guy called Jeremy - unfortunately there is a very different Jeremy in her life at the moment! In the face of Jeremy Hunt imposing the new contracts she promised more action to come.

Ali, one of the 'Heathrow 13' Plane Stupid protesters explained how they are currently threatened with prison sentences over their direct action protest against a third runway at Heathrow.

Everyone agreed that the election of Jeremy Corbyn was a significant breakthrough for the left.

Matt, a local Socialist Party member and prison officers' union rep said he wished he had gotten involved earlier. He decided to join the Socialist Party during the 2015 general election when he saw no difference between the mainstream parties and was impressed with our stand as part of the Trade Unionist and Socialist Coalition (TUSC). TUSC fought on the side of the trade unions and for socialist policies - including for the right to strike for the Prison Officers' Association.

Rebecca Geach, local Spelthorne Labour Party parliamentary candidate at the last election, said we should build on the unity seen at the meeting.

The news that both Unite and Unison's local government groups have adopted a policy of calling on Labour councils to refuse to make cuts was greeted with a huge round of applause.

The meeting agreed to work together within Save Our Services in Surrey to develop and expand the anti-cuts network and to also to continue to push Momentum to open its doors to the wider anti-austerity left and commit to socialist policies.