Build the international fightback against austerity 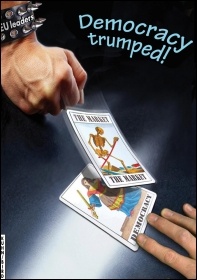 "Pure vindictiveness, complete destruction of national sovereignty, and no hope of relief." This is how economist Paul Krugman described the consequences for Greece of the 'deal' that the Syriza-led government made with the Troika (the EU, the European Central Bank and the International Monetary Fund).

In effect, Greece comes under the neo-colonial rule of the EU and Germany, its strongest economy. EU officials will dictate policy and expect the Greek parliament to rubber stamp draconian austerity measures.

All this suffering of Greek people will be imposed just so that Greece can pay back loans from the Troika. Of course none of that money went to the Greek people - just to the banks! The deal will force Greece deeper into recession, with no prospect of ever paying off its debts.

The Syriza government had no mandate to cave-in to the bosses' Troika. They were elected on an anti-austerity platform and in the 5 July referendum a big majority voted against further cuts.

What is needed is a clear socialist programme in the interests of the working class, to reverse austerity and to start transforming living standards. This must include refusing to pay the debt and democratic public ownership of the big banks and key parts of the economy.

Greek workers are stunned and disorientated and many feel betrayed. Yet they will have no choice but to resist, sooner or later.

Action needs to be built to effectively resist the cuts. And the bitter lessons of Syriza's failure in government shows that the Greek working class needs an independent political voice, a strong socialist challenge to Greek and European capitalism.

This is also the case in Britain, where pro-market, pro-cuts Labour is fundamentally no different to the Tories. The Socialist Party, which has played a key role in the development of the Trade Unionist and Socialist Coalition, will be to the fore in the anti-austerity struggles and building a new mass workers' party with socialist policies.