Fighting the far right in Bradford 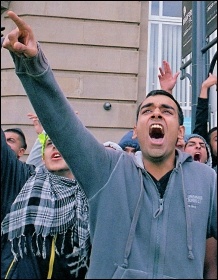 ON SATURDAY 28 August, the racist and hooligan English Defence League (EDL) could only muster 700 supporters to their Bradford demonstration for what was meant to be their 'Big One'. The EDL's protest consisted of racist chants, fighting with the police, and amongst themselves.

Several hundred, mainly local youth and some anti-fascists, protested directly opposite where the EDL were being 'kettled'.

Sam Bell, Huddersfield Socialist Party, reports: "The EDL assembled in their designated pen in a building site near Forster Square, with potential missiles littering the ground. They began chanting the usual fascist slogans. Initially small groups of anti-fascists and locals chanted back at them.

Just prior to 2pm the police tried to move us back and forced us downhill, as though pre-empting some activity. A moment later the EDL hurled smoke bombs, rocks and bottles at us, while the police forced us nearer the firing line crushing us between riot shields and a wall. After heated exchanges we were allowed to go further up the road to safety.

Thankfully no one on our side was seriously hurt, and we gathered further up the road still opposite the EDL, shaken but united.

The next few hours were spent exchanging chants with the EDL, our growing numbers being gently shoved around by the police, and generally being quite confused as to what was going on. 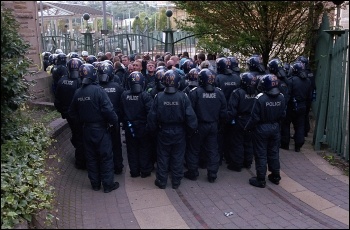 Just after the EDL had their static rally, a section of them broke from their pen and ran, followed by some police and a big group of the locals and anti-fascists. Some EDL got kettled by riot police. Some got their just deserts from local youths for trying to stir up trouble.

For the rest of the afternoon the EDL waited to be escorted on to their coaches by police in relative silence - a sombre end to their demo. By keeping them in our sights at all times we gave the police a reason to restrain them and stopped them from intimidating local people. The unity between anti-fascists and locals was inspiring, with no animosity but an understanding that fascist thugs must be stopped."

At the same time, about 500 people attended the Unite Against Fascism (UAF) peaceful celebration of multiculturalism in the city centre about a quarter of a mile away.

Considering the huge opposition to the EDL in Bradford, the anti-fascist mobilisation should have been a lot bigger. That it wasn't was mainly due to the police and the council and community leaders who warned Asian youth against going into the city centre.

They even organised diversionary events, like the 'Bradford Together' cultural festival half a mile outside the city centre. With only 150 turning up, one attendee described it as "more councillors than human beings."

Also, Hope Not Hate (HNH), and most regional trade unions, campaigned for and got the Home Secretary to ban the EDL and all mobile demonstrations including those against the EDL. At the same time they discouraged people from going to protest against the EDL in Bradford city centre.

So it was positive that UAF organised a city centre protest. But instead of a counter-demo they opted for a 'celebration'. This meant that many local people who came to oppose the EDL by-passed the celebration and felt frustrated that those hundreds nearby did not join them.

The EDL will have suffered a setback from their failure at Bradford, but racists can still gain support in an economic recession, so a working-class based opposition around slogans like 'Jobs and Homes, not Racism' is urgently required to confront the far-right both politically and on the streets.