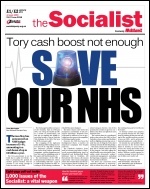 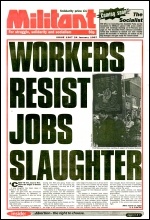 In fury at the popularity of Jeremy Corbyn's Labour leadership campaign, right wing politicians and media alike have been referring to 'infiltration' of the Labour Party by Militant supporters. Militant was the predecessor of the Socialist Party - whose supporters in the past were members of the Labour Party.

Tony Benn: Will and testament

This year's May Day has been dedicated to the memories of Bob Crow and Tony Benn. Here the Socialist carries again its editorial from issue 803, 20-26 March 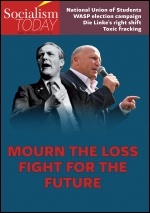 Mourn the loss, fight for the future

A spectre is haunting capitalist commentators, right-wing new Labour and their hangers-on, following the deaths of Bob Crow and Tony Benn. Militant - seemingly long buried according to these very same sources - now haunts them

A deluge of tributes followed the sad and shocking death of Bob Crow, elected leader of the RMT trade union. He was known and respected because the RMT is to the forefront of militant action

'Poisonous infiltrators' in Labour Party were from the Right

Andrew Rawnsley begins his piece on Tony Benn, as many have done, by referring to Benn's latter day status as 'national treasure' 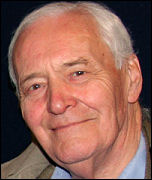 In one week, the labour movement has suffered two big blows with the deaths of trade union left leader Bob Crow and now of Tony Benn. Benn emerged as the major figure of the Labour left in the 1970s, supporting nationalisation and workers' control of industry 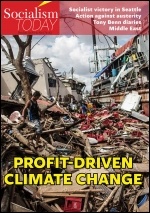 The labour of Tony Benn

Tony Benn's latest volume of diaries continues his frank and honest appraisal of his political life. He has campaigned long and hard - but in vain - to halt the degeneration of the Labour Party. Peter Taaffe reviews A Blaze of Autumn Sunshine: The Last Diaries, by Tony Benn in the forthcoming Socialism Today

‘Vote for us and nothing will change’! was the message of Labour's Ed Balls to the working class desperate for leadership. Two Socialist Party members report on the LRC fringe meeting and on watching the conference on TV 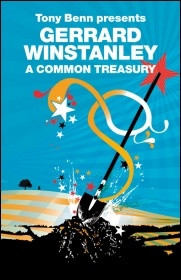 One of the false arguments against socialism and communism is that these ideas are 'foreign'. Karl Marx was a German Jew and a follower of the German philosopher Hegel. 'Revolution is something that...

Michael Foot - the end of an era

Many "Old Labour" workers and socialists will be saddened at the death of Michael Foot and will see it as signifying the death of an era. However the ideas of Michael Foot - of piecemeal socialist reform of society through successive 'progressive' Labour governments - died long before he physically passed away on 3 March. Socialist Party general secretary Peter Taaffe writes.

In the 1970s and 1980s, Tony Benn earned the scorn and hatred of the rich, the capitalist media and their right-wing friends within the labour movement because he was seen as a champion of socialist ideas, writes Peter Taaffe...

Workers' party debate: TONY BENN can still draw a crowd. Over 200 students packed into a recent Stop the War Society meeting at University College London to hear him speak. ... By Paula Mitchell