in Greenwich and Bromley

The planned decimation of library services in the Bradford area of West Yorkshire has led to angry scenes at recent 'consultation' meetings, where details about the possible closure of eleven libraries have been put on the table.

Labour controlled Lambeth Council in South London plans to devastate library services in the borough. It plans to close down five of its ten libraries in order to sell them off to private gym companies. Lambeth's residents are not prepared to put up with this attack.

A call for an end to austerity from Jeremy Corbyn was met with a standing ovation and cheers from a near 1,000-strong audience

150 people, a dalek, a crocodile and Mickey and Minnie Mouse protested on 13 June against cuts to the Library of Birmingham.

Protecting libraries is an important part of Trade Unionist and Socialist Coalition (TUSC) campaigning. In Bristol, the independent mayor plans to close seven. Scandalously these cuts were fronted by the Green assistant mayor

Unite members working at Bromley council have begun a fight to defend public services from privatisation, oppose cuts to pay and conditions and defend the right of workers to be organised in a trade union

Bristol backs books: Bristol City Council has been slammed for low school results in reading. So what does it do? It plans to close seven branch libraries, writes Sheila Caffrey.

Councillors do have a choice over cuts

Just weeks from the elections, council budget cuts are hammering communities and workers

"We have to fight for our libraries. They're part of our working class socialist heritage." This was the response of a woman involved in the campaign to keep our Gateshead libraries open 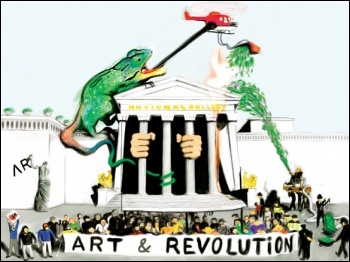 Art is too often put out of ordinary people's reach by extortionate prices and a snobbish social elite. So why is big art such big business? And what does that mean for working class artists?

How Unite beat the library employers