Thousands of jobs already destroyed. Thousands more announced almost every day. The 'job retention scheme' is turning into a jobs haemorrhage as the government starts to wind it down, with a view to scrapping it in October.
As speaker after speaker at the NSSN conference on 4 July said, trade unions must fight every job cut and every pay cut.

Tory chancellor Rishi Sunak promised us all that the government would give the NHS "whatever it needs." Now he's refusing to stump up the cash.

Management at Homerton Hospital in Hackney, east London, has outraged staff by insisting that outsourcing and inferior pay and conditions for ancillary workers will go on

The PCS general secretary has said the union needs to restructure and cut staff or merge.

On 25 June, Google announced a "new licencing programme to support the news industry". The programme pays publishers for high-quality content in an effort to remove paywalls. A "new news experience"

Workers at Tower Hamlets Labour-run council in east London are set to strike on 3, 6, 7 July against management plans to 'sack and re-engage' its entire workforce, in order to force them to accept worse terms and conditions. 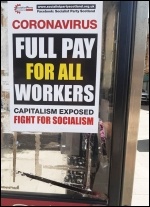 Supporters of the National Shop Stewards Network held protests outside Debenhams stores in Leeds, London, Plymouth and Southampton against the company's savage cuts to jobs and stores, as part of a day of action called by members of the retail workers union, Usdaw.

As a warning of the coming recession we are now entering, Debenhams went into administration in April last year, with 22 stores closing, and all but 39 of the remaining stores having rent reductions

Homerton Hospital in north London has awarded its contract for cleaning, catering, portering and security back to private contractor ISS for another five years

Since 2010 the pay of PCS members has been cut in real terms by over 20%. Each year the government-capped pay increases have fallen below rising prices.

Over the last 12 months University and College Union (UCU) members have undertaken a determined struggle in the 'four fights' dispute, taking 22 days of strike action over pay, casualisation, workload and pay inequality

The hospitality industry has been downsized. For some, the furlough scheme came too late and workers were already cut, or businesses had shut their doors for good.

Will my boss starve me back to work this summer? It's a question that might start keeping furloughed workers up at night

The Tories are trying to force workers back to work

Rishi Sunak has announced the government's plans for the furlough scheme, which will be extended until October