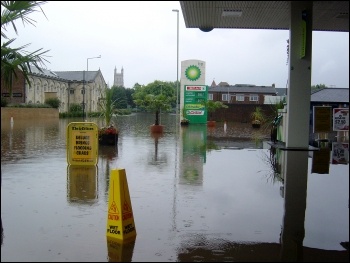 Flooding in Gloucester in 2007, photo Chris Moore   (Click to enlarge)

While flood events are inevitable, any country can be more resilient to flooding by increasing the standard of protection. But this costs money, which successive UK governments have been unwilling to increase.

The climate is already changing, and we can expect to see more frequent large floods, as well as new weather patterns. We are likely to need a major increase in funding for flood risk management. What we have seen instead are promises to not cut total funding!

There have already been cuts in the industry. While the capital budgets have been maintained - to deliver large projects such as flood storage areas, new walls, and other defences - government bodies such as the Environment Agency (EA) experience revenue budget cuts. This could mean staff receive less training in how to respond to floods - or the maintenance budget for new flood defences is reduced.

Cuts bring pressure on the workforce, and the EA risks having a high staff turnover and relying on temporary staff to do its non-emergency duties. These staffing issues could affect the readiness of the EA to respond to flooding.

Everyone expects our local and national governments to do their job correctly. Hence the huge and justifiable anger at failures in flood defences or, as is in Doncaster, the apparent lack of work to improve the defences since the summer 2007 floods. There was also anger at the lack of help for those who have now been homeless for several weeks; council rest centres are for emergency shelter, but people can't live in them indefinitely.

This summer we also saw the Wainfleet embankment failure, and the Whaley Bridge Dam failure - just two examples of the type of event which should never have become an emergency. These events dramatically demonstrate the need for funding to maintain our country's infrastructure, the need for better planning to respond to emergencies, and the need for democratic control.

Local government must ensure they use all their oversight powers where safety is at risk. But arm's length 'Quango' organisations like the Canal and Rivers Trust must be renationalised and fully funded so that they are able maintain their structures such as the Whaley Bridge dam.

We will always have floods, but the risk to homes can be reduced with more spending on defences. Risk to farmland can also be reduced, using better weather forecasting and increasing computer power so that flood storage areas are only used when absolutely necessary (with compensation for ruined crops as appropriate).

Other solutions like new woodlands would not be able to stop the most intense rain from causing floods, but it can be a useful approach in upland areas for small to medium floods. Such large areas of trees are needed to stop the largest floods, that farmland and national parks would be threatened. However such questions could easily be overcome in a socialist society, democratically planned and run to meet the needs of the vast majority of people, while maintaining and improving the natural environment.

The second torrent or floods to hit Doncaster in 12 years has also seen a flood of concerned-looking politicians wading through Bentley, Fishlake, and many other affected areas. Those concerned faces often aren't for the people and their homes, but for their precious votes, and the worry that they too are being washed away.

The working-class areas drowning in three feet of water have always been Labour to the core. However, while I too waded through these areas, a wave of discontent with the status quo was easy to see. Angry, upset, and sodden, they directed these feelings towards both Boris Johnson and Doncaster North's right-wing Labour MP Ed Miliband.

Charges against Boris were for his inaction and almost obvious lack of attention for an area he neither understands nor cares about. Charges against Ed lie with his lack of local presence and an ever increasing friction from a seemingly widening split in the views of the people of Doncaster and himself.

As the waters subsided; dirt and anger remained. It is impossible to fully understand how this dirt and anger will be used by the people of Doncaster in the upcoming election, but water seems to be seeping through the cracks of this Labour stronghold.

Anger at cuts and private profiteers

Back in 2007, Sheffield was hit by floods and thousands of people were affected. But even though we had a Labour government it took five years to identify the schemes for flood defence systems. Then these schemes didn't go ahead because of the proposed cuts to the Environment Agency. The cuts eventually mounted to 15% of the workforce, including 550 jobs in flood prevention!

People paid out of their own pockets to fix their homes as the insurance companies would not pay out for damage, stating it was an 'act of nature' and they weren't covered for this. And now people living in areas where floods have occurred are not eligible for home and contents insurance.

Instead of investing in measures to defend land and property against flooding the Tory-led governments have pursued an austerity agenda of public spending cuts.

It's no wonder that anger is mounting. Residents have blamed the government for a lack of response. But they also know that the private water companies are raking in profits while not investing and not replacing old Victorian plumbing systems.

A planned programme of building and replacing the infrastructure and maintenance of existing systems must begin.

Firefighters speak out: Tories - too little, too late

Boris Johnson - too little, too late! What do you expect from a Tory who as London mayor closed ten fire stations and cut 500 firefighters' jobs.

It was outrageous that Johnson didn't immediately declare the floods a national emergency, which triggers the Bellwin scheme of emergency financial assistance for local authorities.

We've just saved 84 firefighter posts here in South Yorkshire that were under threat. Imagine if those jobs had gone! There would have been 40 less firefighters from two watches who would have been able to work day and night on the floods.

We've had help from ten other fire and rescue services. High volume pumps have been brought in, but not the staff, training or equipment to go with them. The costs of this will be borne in South Yorkshire. So we're fearful that these extra costs incurred due to the floods will lead to demands for more job cuts year on year.

Pumps don't make rescues, firefighters do. There's a photo of two of our lads in Rotherham lifting a shopping bag on a ceiling hook up to an old lady in her bedroom window stranded by the flooding. They'd bought her two pints of milk, tea bags and a loaf of bread. That's what a firefighter looks like, that's what a socialist looks like. And our control operators, as well as handling all the flood calls, dealt with a 36-car scrapyard fire and an aircraft emergency at Donny airport, all on the same night and day.

At present, the Environment Agency (EA) is the primary agency dealing with flooding. Its funding is allocated according to population density and house prices. I've got a map that shows that most of the funding goes to 'Blue' areas down south.

We're hoping that a Jeremy Corbyn government will give the fire service the statutory duty for flooding leading to the necessary investment and funding we need, rather than the cuts we've suffered for the last decade and longer.

The recent flooding across South Yorkshire has rightly elicited the anger of working people; the sluggish response from services degraded by austerity, an already creaking public transport service crippled for weeks, and contemptuous displays of concern by politicians, have all infuriated people who feel the effects of nature and class bias.

Flood defences, sluice gates and dredging are ultimately like plasters over a wound; their effectiveness in mitigating flooding is limited, and only pushes the problem downstream, figuratively and in fact - as people in parts of South Yorkshire downstream of Sheffield have found.

While we need new social housing, obviously building on floodplains is exactly the wrong thing to do. We need to reenvisage the city and urban environments, and reconfigure work and recreation.

Flood events are going to be more frequent as the climate warms. It is important to use events like these to communicate the seriousness of climate change, its relationship with the very real nature of class interest, and present realistic, honest assessments, answers and solutions that do exist - not platitudes, wishful thinking and ineffectual policies.

In a recent speech, Labour's John McDonnell mentioned 'retro-fitting' existing housing stock while talking about social housing policy. These are exactly the kind of things that need to be advocated; the rewilding and reforesting of uplands and urban centres is desperately needed to ensure that the working class stands a chance in an environment that is ever more volatile and inhospitable to life itself.

My house, and many locally, do not have rainwater drainage, rely on soakaways for rain, and are often built below the level of the road.

By 8pm on 7 November a moat around my house was a foot deep. After the 2007 floods, all homes concerned were issued with a box of "Flood Sentries" which are basically large sticking plasters to put over air bricks to stop flood water getting underneath the house. What it didn't say was you had to use them BEFORE the brickwork becomes wet, so they failed spectacularly. At this point I decided the only way to do it was with sand bags.

A manager at the council yard explained he had no sandbags but expected several lorry loads imminently, so it was a case of waiting for them to show up. During this time several other people arrived from different places needing the same thing. Meanwhile the rain was still very heavy and showing no sign of slowing up. Around an hour later the first lorry showed up.

At 2am a lorry load of sandbags turned up in our area and we set about sandbagging anything we thought needed it. The neighbours were amazing. The bags weren't large, but they were heavy.

The next morning I realised how much water was coming out of the sewer in our front garden and that of my neighbours. I set off to the local hire store and hired a water pump. But overnight water had gotten into my air bricks and my ring main had been blown, so I had no way of powering the pump. A neighbour whose power was intact, kindly let me use his.

Without the solidarity shown by my the neighbours and close residents, I'm certain we would have been flooded out. They worked without complaint until the job was done and showed enormous community spirit in coming together to help those who needed it.