Usdaw general secretary John Hannett's retirement, announced at the shop workers' union's annual summer school, has been a long time in the offing

It's 'pay-back' time! Coordinate the strikes.
The government has caved in. It has agreed to lift the 1% public sector pay cap from next year, reflecting the pressure the Tories are under.

Mike Ashley, promised last year "to ensure that all staff are treated with dignity and respect".

Since the NHS began outsourcing care services to private companies and charities, wages and conditions for carers, support workers and healthcare assistants have been squeezed. 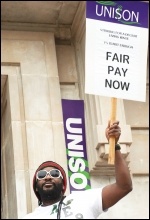